When you travel by air from Bali to Yogyakarta in Central Java, you will inevitably see the massive Hindu temple complex of Prambanan.

If you travel by road from an Easterly direction, you cannot miss it – Prambanan is only 100 metres from the road. Whichever way you first see this massive complex, its towering temple structures are awe-inspiring, and its beauty, breathtaking. Prambanan is located in Central Java, roughly 20 kilometres from Yogyakarta, the renowned cultural centre of Java.

Built during the Sanjaya Dynasty in the 9th century, the central area has three main temples according to the Hindu Trinity – ‘Vishnu’ facing to the North, ‘Shiva’ in the centre, and ‘Brahma’ to the South. Facing each of these temples is a smaller shrine for their vehicles. The vehicle of Shiva (the Destroyer) is Nandi the bull, the vehicle of Vishnu (the God creator) is the Garuda eagle, and, Brahma (the Guardian god) has a vehicle of the swan, Angsa. Each temple has its own smaller courtyard. The main temple Vishnu, situated in the inner courtyard, is actually surrounded by smaller temples called Pewara temples. These temples were apparently built, and given as gifts to the king in a manner of submission. 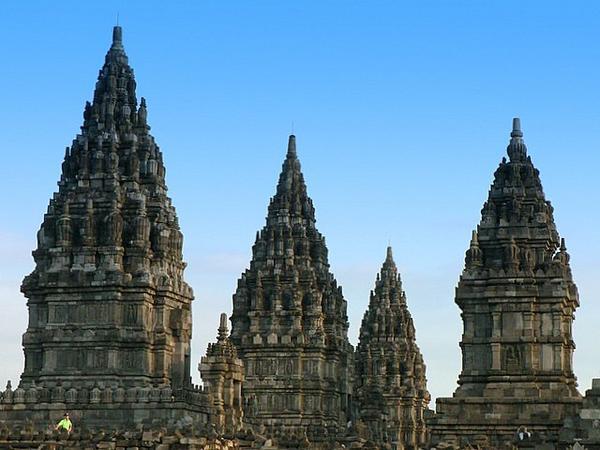 Walking from the carpark along the main path, the grounds and lawn are immaculately kept, and scattered here and there are piles of square stone blocks – smaller temples yet to be reconstructed. Walls of varying height can be seen around the complex, even though most are in disarray. It isn’t difficult to imagine just how magnificent this complex was in the 9th Century.

There are well over 250 smaller temples in the Prambanan complex spread out on the Prambanan plain. All the temples are within walking distance and easily accessible.

Shiva, the main temple, is 47 meters in height, and has 20 sides. It has remarkable stone relief panels on all its 20 sides depicting the story of the Ramayana. If you enter from the east side of the temple and walk around, the story reveals itself. Basically the story of the Ramayana depicts how the wife of Prince Rama, Sita, is abducted by an ogre king. Prince Rama, accompanied by the monkey king Hanuman and his army of monkey soldiers, attack the ogre king in the forest and rescue Sita.

The Ramayana Ballet is performed every year on the night of a full moon, between the months of May to October. It is a magnificent performance with a backdrop setting of the main three temples. It is almost an all night affair, so bring plenty of insect repellent and something soft to sit on!.

Steep steps lead up to the entrance of the Shiva temple, and once inside, chambers are located in each side of the temple. In the eastern chamber is a magnificent statue of the four-armed God Shiva. As I walked from chamber to chamber, the dim light filtering through, I couldn’t help but be spiritually moved, at peace within myself. The western chamber has a magnificent statue of Ganesha, the divine teacher.

The locals often refer to the Shiva temple as Candi Lorojonggrang and if you enter from the north, then there is a statue of the princess Roro Jonggrang. There is a quaint legend associated with this: Roro Jonggrang, who was the daughter of King Boko was actually cursed into a statue.

According to legend, an extremely powerful man by the name of Bandung Bondowoso desired to wed Roro Jonggrang. However, she did not love him, and decided to set Bandung Bondowoso a task to deter his desire to wed her. Roro Jongggrang declared she would only marry him if he could build a thousand temples in one night. Bandung Bondowoso was a powerful man with supernatural powers and saw no difficulty in the task set. When he had almost completed Roro Jonggrang’s request, she panicked and ordered all the women from the villages to the east to burn piles of hay causing light, and make plenty of noise by pounding rice as if the day’s work had begun. These actions caused the situation surrounding the area to be as if the sun was rising. As the cocks began to crow, being fooled also, the supernatural beings assisting Bandung Bondowoso fled in terror of the pending sunlight. When Bandung Bodowoso realised he had been tricked, he flew into a rage and cursed Roro Jonggrang into a stone statue finishing his task proudly.’

The temples of Brahma and Vishnu are small in height compared to Shiva. The relief panels depicting the story of the Ramayana on the outer walls of the Shiva temple, are completed and the story ends as seen on the relief panels around the walls of the Brahma temple. I was fascinated by the actual story, and as you go from panel to panel, it seems as though you are actually reliving it. On the balustrades of the Vishnu temple, the story depicted is that of Lord Krisna. It tells the story of the childhood of Praba Krisna – the epic of the Mahabharata. What I found interesting was the image of Vishu, known as the ‘Preserver’ inside the temple. It was so life-like even though centuries old.

One of the finest Indonesian sculptures is to be found in a smaller shrine, Nandi. A figure of a bull kneeling on all fours, looking extremely powerful, is located inside a chamber within. From these temples and smaller shrines, there are various others worth exploring spread out over the plain.

It would take more than a full day to appreciate and ‘take in’ the beauty of the complex on the Prambanan plain. It is advisable to arrive at Prambanan before the hordes of tourist buses. This usually occurs at around 10am. Many years ago, I was caught out in such a situation, and I saw very little of the temples. I only heard the constant gibbering of tourists as they ‘clicked’ away with their cameras, and scrambled over the temples and shrines. The best times to appreciate the Prambanan complex, I have found, is at dawn and at dusk. The sun rising and setting is a photographer’s delight, and an explorer’s dream.

An interesting aspect of the Prambanan Plain, is that there are several other shrines and temples nearby – and all dedicated to Bhudda. Three hundred metres to the north-east of Prambanan is located the large Bhuddist temple of Sewu. Although not as big in area as Prambanan, it is vast and contains four small temples – Lor Kulon, Asu, Lumbung and Bubrah. I found it to be an interesting complex seldom visited by tourists.

About a kilometre to the east of the Sewu temple is the Bhuddist temple of Plaosan. There are two main temples standing side by side. Each has terraces with relief panels on the balustrades – the southern most of the two temples depicts a man and the other temple, a woman.

For those of average fitness, a pleasant walk to the Kalasan Temple, located a kilometre along the main road from Prambanan is a delight. It is 24 meters high and the base is uniquely built in the shape of a Greek Cross. Built in the Sanjaya Dynasty, it is regarded as a temple of honour being for the marriage between King Pancapana of the Sanjaya Dynasty and the princess Dyah Pramudya Wardhani of the Caliendra Dynasty. What I found fascinating about this temple was its coating. A yellowish material made from the sap of a certain tree. The coating is called ‘Vajrelepa’ and its function is to protect against moss and mildew. It certainly did its job efficiently and this was evident as I walked around the temple walls looking at the many preserved carvings.

To the north-east, about six hundred metres, is located the Sari temple. I was very wary of entering this temple as most of the entrance stairway had crumbled away, and there was even a few stone slabs fell off the stairway whilst I was standing there!. Like the Kalasan temple, Sari too was coated in ‘Vajrepala’. It has two floors, as the gatekeeper informed me in broken-English. Apparently the upper floor was a sanctuary to store religious relics, whilst the other floor was an area for prayer by the Bhuddist monks who lived there, taught, and meditated there.

The last temple I visited in this ‘holy area’ was the Sambisari Temple. A volcanic eruption in the year 1006, buried the temple. Local stories tell of a farmer who was ploughing the field one particular day and the gouging hook of his plough struck the tip of the temple. Only recently restored, what amazed me was that the temple was below the surface of the surrounding area. There is roughly sixty steps leading down each side into the temple situated in a perfect square area. Sambisari was built in the 10th century. The temple area is enclosed by a two metre high stone wall, and although lacking any relief panelling on its balustrades, the ornate carvings on the temple walls are magnificent.

Like most places of worship throughout the world that I have visited, I have always found that the ideal time to visit is early morning – especially in Indonesia when the sun is at its fiercest during the middle of the day. Central Java is an archaeological delight and the Prambanan Complex is just one of its treasures.