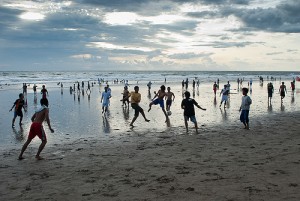 Although December falls during the wet season, Christmas makes it a peak travel destination at this time of the year. Australians and Europeans usually head to Bali or Java in search of sun and sand during holidays. So, expect the hotel prices to peak and the airfare to be slightly more expensive than usual.

December falls during the wet season, which lasts between October and April. Usually rain falls in downpours, which allows the travelers to explore the cities in between those. However, it’s also possible to rain for days. Generally it’s not a problem to travel in Indonesia during this time of the year , the muddy roads aren’t exactly in good shape for getting around the country.

Just remember that the peak of the wet season “shifts” with the month. From December to February, it is usually impossible to get to Nusa Tenggara, as the rough seas cancel the ferries. Also the northern part of Sumatra gets heavier rains until January. In Bali, the wet season makes almost no difference when it comes to traveling.

>>read more about Weather in Indonesia

Flights and accommodation in Indonesia in October

Although December falls during the wet season , it’s also a peak travel time mostly in Bali and Java. So expect hotel prices to spike during Christmas. The same is valid for airfare to Indonesia . Make sure to book your ticket in advance. Although the prices tend to be higher, due to the many low cost carriers serving Indonesia, flying here during December won’t burn a whole in your pocket.

Pay attention to the region you visit and the particularities of the weather there. You wouldn’t want to deal with muddy roads while trekking on a volcano or exploring a forest, would you? Instead, head to the beach! There are plenty to choose from, so you won’t need to stay on the most popular ones. Pack a picnic basket and head to a secluded beach for some fun with your loved one.

December is still a a good time to explore the cities. For example, in Jakarta, make sure to visit the Beautiful Indonesia Miniature Park. If caught by a rain shower, just go to a museum. Another option is spending the time in one of the Shopping Malls. You can look for bargains or you can try your bowling skills.

>>read more about Things to do in Jakarta

Regardless of which area of Indonesia you plan to head to, you must try the local food and yes, it also includes the durian. If you are not brave enough, just stick to the flavorful dishes.

Of course you can see a Komodo dragon in the Zoo, but how about search for them in the wild? Head to the Komodo and Rinca islands but make sure not to get too close to them as their bite can be lethal.