Getting from Singapore to Jakarta 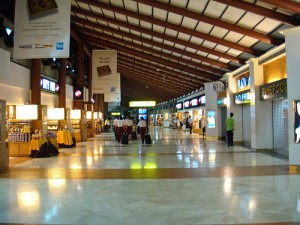 Singapore is a city-state in Southern Asia and a well known connection point between cities in other continents and Indonesia. Jakarta , Indonesia’s capital, is very well served by flights from Singapore, which makes this route a popular one used by travelers to/from Southern Asia.

There are only two options to travel from Singapore to Jakarta: by air or by sea. The fastest and also cheap option is by air. With plenty of low cost carriers serving the route, the fares start at US$44* one way.

Flights from Singapore to Jakarta

Changi Airport (SIN) is the main airport serving Singapore and also a major hub in the area, being the fifth busiest airport in Asia. It has four terminals and one of them is dedicated to the low cost carriers operating at the airport. The airport is located about 17 km from the commercial center of Singapore. It is hub for Jetstar Asia Airways, Silkair, Singapore Airlines, Tiger Airways, Qantas and Valuair.

Soekarno Hatta International Airport (CGK) is the airport which handles almost all international traffic to Jakarta. It also receives all domestic traffic. It is one of the most punctual airports in the world. The airport is hub for Batavia Air, Cardig Air, Garuda Indonesia, Indonesia AirAsia, Lion Air, Merpati Nusantara Airlines, Republic Express Airlines, Sriwijaya Air and Wings Air.

Should you plan to fly between the two cities in late December 2011, expect to pay from US$87 one way on Tiger Airways. In mid-March 2012, single airfare starts at US$44 on Indonesia Air Asia. Same fare applies for the best time to visit Jakarta (June to September).

>>read more about Flights to Jakarta

Ferries from Singapore to Jakarta

If you prefer a slower approach to traveling this route, then you can take the ferry from Singapore to Bintan and then catch another ferry to Jakarta.

From Bintan (Kijang port) catch a ferry to Jakarta operated by Pelini , the national ferry company.

Note:* at the time the article was written