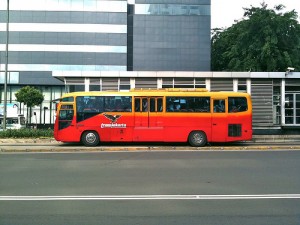 In Indonesia, land travel, water travel and air travel complete each other. Where land travel is non existent, you can either fly or take a ferry. Although there are buses connecting the cities and some of the islands, traveling by bus is not safe due to the drivers’ reckless behavior and the poor state of the roads.

Getting to/from Indonesia by Bus – From Another Country

You can travel to Indonesia by bus from three countries it has land borders with: East Timor, Malaysia and Papua New Guinea. You first need to apply for visa before getting a bus ticket.

Getting around Indonesia by Bus – From One Region to Another

Interregional buses typically connect the islands, mainly between Java and Sumatra. There are two types of buses: with air conditioning and without air conditioning (economy class). Traveling overnight is considered dangerous. The roads are poor and the drivers’ habits are not very safe, either. If you do travel by bus, keep your eye on your possessions at all time and don’t flash expensive items. In the wilder parts of the country, buses are known to the ambushed by bandits.

Getting around in Indonesia by Bus – Within a Region

There are intercity buses which link the cities within an island. However, the same rule applies. The roads are bad, the drivers’ are reckless. Traveling by day on short distances is not a problem. Do remember to watch your possessions at all time.

Getting around in Indonesia by Bus – Within a City

In Jakarta there are two types of buses:

Minibuses (mikrolet) and minivans (angkot) are used on smaller streets and the rates are lower than the bus rates.

Regular buses don’t stop at bus stops and the schedule is pretty much non existent. You can signal when you want to get off.