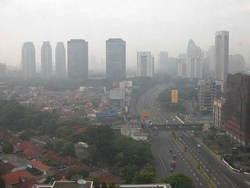 The sprawling metropolis of Jakarta first started its life as the trading port of Sunda Kelapa and a centre for the pepper trade, and later under the Dutch occupation became known as Batavia. Jakarta is the largest city in Indonesia with a metropolitan population of more than 23 million people and is the eleventh largest city in the world. Actually, the entire area of the metropolis is known with the acronym of Jabodetabek and comprises Jakarta city, Bogor, Depok, Tangerang and Bekasi. If you look at a map of Java you will see that Jakarta is located on the north-western coast of the island at the mouth of the Ciliwung River on Jakarta Bay with this river being the most important as it divides the western and eastern sections of the city. Jakarta has the honor of special status as the capital of Indonesia or Daerah Istemewa Jakarta. In the Bay of Jakarta is located Pulau Seribu or Thousand Islands group and is a tourist destination providing excellent diving and white sandy beaches albeit an expensive place to holiday. The capital is divided five sections (Central, West, South, East and North Jakarta) and four outlying suburban areas of Tangerang, Bogor, Depok and Bekasi. Jakartans have a unique language indigenous to the city known as Betawi.

Jakarta has some of the finest museums and galleries in Indonesia scattered around the city. Quite a few are within walking distance of each other and the entry fees are quite minimal. The city is also steeped in history from its very beginning to the Dutch occupation and present day. There are numerous historical sites worth visiting and my favourite being Sunda Kelapa with its old warehouses dating back from the Dutch East India Company. There is an excellent museum guide and can be bought at most bookshops. For inspiration, check out the Jakarta daily photo.

There are numerous ways to get around Jakarta even by car but of that I would not recommend as the traffic is horrendous and the traffic jams deplorable. Not only that, Jakarta is a nightmare to navigate in with one-way streets and crazy freeways. Taxis are a good option but then again, you will still be travelling through the chaos that is Jakarta thoroughfares. There are a multitude of taxi companies and by far the best being Bluebird mainly because they use their meters!. Other taxi companies that run a close second to Bluebird are Cendrawasih, Morante and Pusaka Nuri taxis.

The train system is another option although it is a little bit left to be desired as there have been reports of crime and sexual harassment during the busy hours. There is a monorail system of sorts, but for general use of the train outside rush hours, it is good to get around the city and to the various tourist sites. Just use your common sense as far as security is concerned and this applies to all forms of public transport.

The Transjakarta Busway system is a functional and comfortable form of public transport but again, avoid the rush hours. The system is user-friendly with station announcements and an LED display inside the vehicles. The buses run from 5am to 10pm daily and transfers between lines are free.

For my money and the better way to get around is by using the Bajaj The crazy-looking and orang coloured scooters are in the form of tricycles that carry passengers in a small cabin at the rear. Since they can weave through Jakarta’s traffic jams, they are a great way to get around town albeit in a slow manner, hot and very bone-shaking. These scooters are a set price for short hops around town and for Rp6,000 you really can’t complain about that. Ojeks are another form of transport that can zip around the city in ease. Ojek services are guys with bikes who will usually take you short distances down alleys and roads. Agree on the fare before you set off.

The latest addition to solve Jakarta’s traffic mayhem has been the introduction water taxis. This service is good and uses canals as a medium for public transportation. They are managed by the Transjakarta Busway system and so linking into them from a train or bus is ideal way to mix your transportation around town.

Then there is my favourite way of getting around the city and one that won’t cost you money and that is by walking. Some people would say that walking around the centre of Jakarta is not recommended, but in general, I have found it quite safe. But, muggings do happen in Jakarta and on a frequent basis in the poorer areas and so, as I mentioned before, use common sense when walking around. So be aware when using overhead bridges, even in the daytime.

There is a plethora of accommodation in Jakarta to suit any budget, and in fact, there really is an over supply of places to stay so you will never be caught out not finding a place to plonk your head. A majority of budget travellers head to Jalan Jaksa. It seems to be a mecca for them. The best of the mid-range and upper-priced hotels are located near or in the city centre.

For some unknown reason it appears to more expensive to eat in Jakarta than anywhere else in the archipelago. Might seem stupid but that’s the way it is. There are an enormous amount of restaurants and warungs that serve foods not only from around Java but also from the archipelago. Be sure to try the Jakarta cuisine for its unique tastes. There are also plenty of night markets scattered around the city.