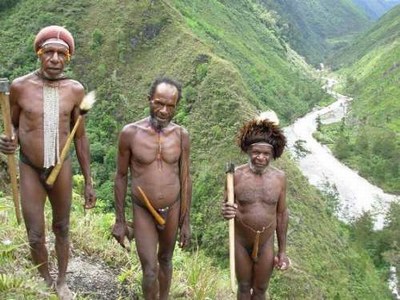 Located on the western end of the island of Papua and the furthest eastern province of Indonesia, West Papua is often referred to as the last bastion of adventure travel in the archipelago. Don’t let that deter you from travelling there because as a province it has so much to offer tourists with all manner of tastes in travel. Stunning beaches with warm ocean waters lapping the shores and mountain ranges seemingly rising to the heavens, intriguing nature reserves, stunning jungles and some of the most ancient, primal tribes on the planet can be found on this amazing section of Indonesia. The province covers the Bird’s Head Peninsula and surrounding islands and with a population of approximately 800,000, it makes it one of the least populous of all Indonesian provinces. The capital of West Papua is in Manokwari and is a fabulous place in itself. There are all types of accommodation available in the cities and surrounding villages and a stay with some of the locals will prove to be one experience you will never forget but only treasure.

Even though West Papua might seem rather ‘wild’ to a lot of travellers, there are some amazing and fascinating places to visit and awe in the spectacle of nature.

A soft white sandy beach with clear water with beautiful scenery, gentle breezes makes it a good place for recreation and swimming. Only 2 kilometres from Manokwari town, this beach can be reached by motorcycle, car, or public transport.

Facing the Pacific Ocean, having a wave altitude of 2 meters most of the time, this beach is perfect for water skiing and wind surfing. Located five kilometres from Manokwari town, this beach is easily accessible by all manner of transport.

Stretching out with a beautiful panorama, it is a wonderful place for fresh water fishing; like goldfish, mujair (a kind of fresh water fish), and fresh water cat fish. Situated 20 kilometres from Manokwari town, this lake is easily reached.

This house is uniquely built by the Arfak ethnic group. Rare and unique in design, this type of house has many poles to support it. It is for this reason that the house is called Rumah Kaki Seribu (House with one thousand feet). Its walls are made of tree barks and its roof is made of coarse grass. These houses can still be found in remote places like Kebar and Anggi.

Meja Mountain and the Japanese Monument:

This mountain, looking like a table in the distance, is a preserved and protected area. Still a virgin forest, having enchanting and beautiful panorama, this area is good for hiking, and other similar sporting activities. A monument, called Monumen Jepang, has been erected on this mountain to commemorate the first arrival of the Japanese Army. Only two kilometres from Manokwari town, this place can accessed by motorcycle or on foot.

Located in Pasir Putih village with a beautiful natural panorama, this waterfall has various types of flora and fauna. It is a wonderful bathing place. It can be reached within ten minutes by boat from Fak-Fak town and by walking within two and a half hours following the river bank.

Located in front of Fak-Fak town, this island has amazing and beautiful natural scenery. It has a garden full of numerous colourful flowers and many types of plants. A monument, called Perjuangan Merah Putih was erected there. A mini museum was also built there to keep artifacts of historical values. It is accessible within five minutes from Fak-Fak town by boat.

This unique fish is traditionally raised in Webra village. This place can be assessed by various types of vehicles.

Ancient reddish pictures of hand palm, weapon, and animals on the cliffs of the islands at an average altitude of 10-30 meters from sea level in front of Kokas town.

This is the coastal city and regency in Papua and has some beautiful islands.

It is a beautiful long and clean beach where there are plenty of exotic corals. It is also suitable for diving. The distance from Sorong town is 3 km and can be reached by vehicles.

An island with slightly sloping beach, soft sand and pure water is very suitable for swimming and fishing. It is located about a half kilometre across Sorong town and accessible by speed boat.

An island located in the middle of Dampir Waigeo Straits. Apart from its scenic nature, it has also an interesting and enchanting sea bottom that is very suitable for diving. It is about 1.5 hours to reach by motor boat from Sorong town.

An island with various kinds of trees, soft sands and pure water is a place for bathing and fishing. It is accessible approximately 20 minutes from Sorong town by speed boat.

This hot spring is found in Makbon District and is used to cure skin diseases. It is situated 60 km from Sorong town and reachable by vehicles.

Erected in 1969, and located in the centre of the town, this monument commemorates Indonesia’s struggle to have West Papua (the former name of Papua) back.

World War II Monument. Built by the Dutch in 1948 in the center of the town, this monument commemorates the assassination of police officers and other government workers by Japanese Army.

Built in 1944/1945 and located at the centre of Kokas town, this fortress was used as a defence and hiding place for the Japanese Army during the Second World War. It can be reached within four hours by boat from Fak-Fak town.

This forest has many types of plants and is used by the Faculty of Agriculture and Forestry of Cenderawasih University for research purposes. Situated seven kilometres from Manokwari town, it is accessible by motorcycle, car, or public transport. 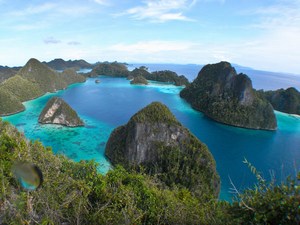 The Raja Ampat, or “Four Kings,” archipelago encompasses more than 9.8 million acres of land and sea off the north-western tip of the province. Located in the Coral Triangle, the heart of the world’s coral reef biodiversity, the seas around Raja Ampat possibly hold the richest variety of species in the world. Four large islands of Waigeo, Batanta, Salawati, and Misool, plus hundreds of smaller islands area known as the Bird’s Head functional seascape, which also contains Cenderawasih Bay, the largest marine national park in Indonesia. Raja Ampat are the richest in the world. The area’s massive coral colonies show that its reefs are resistant to threats like coral bleaching and disease – threats that now jeopardize the survival of corals around the world. In addition, Raja Ampat’s strong ocean currents sweep coral larvae across the Indian and Pacific Oceans to replenish other reef ecosystems. Raja Ampat’s coral diversity, resilience, and ability to replenish reefs make it a global priority for marine protection. Raja Ampat’s total number of confirmed corals to 537 species (a remarkable 96% of all scleratinia recorded from Indonesia are likely to occur in these islands), and 699 mollusks species, the variety of marine life is staggering. Some areas boast enormous schools of fish and regular sightings of sharks, such as wobbegongs. In Mansuar, it’s highly likely you’ll encounter large groups of manta rays and turtles. From the boat and often close to shore you may get the chance to don your snorkelling gear for some unforgettable interaction with resident pods of dolphins or even some passing whales. 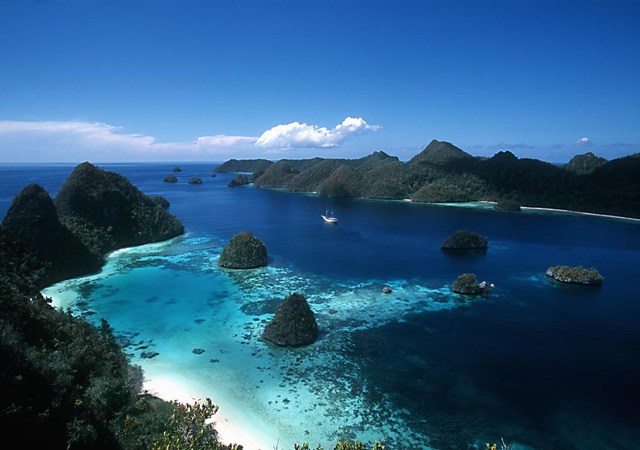