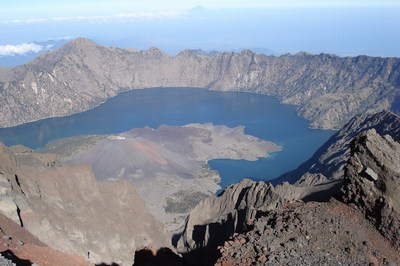 In reality Nusa Tenggara Barat encompasses the main islands of Lombok and West Sumbawa as well as the islands in between such as Nusa Lembongan, Gili Air, Gili Meno and Gili Trawangan. These three islands are clustered together just off the northwest coast of Lombok. Coral gardens abound in clear waters around the islands. Gili Air, the nearest island, can be reached in 10 to 15 minutes by outrigger boat from Bangsal harbour. The invisible diving line between Western and Eastern Indonesia and acts as the Western boundary of West Nusa Tenggara is known as the Wallace Line marking a point of transition between the flora and fauna of Lombok and Sumbawa.

At around the time Islam first came to these islands in the 16th century; four Hindu Kingdoms co-existed in apparent peace in what is now West Nusa Tenggara. Lombok experienced strong Balinese influences, but has retained a unique identity. The indigenous people of Lombok, the Sasaks, are predominantly Moslem and have a strong, distinguished tradition, as do the people of neighbouring Sumbawa. Soft, white sand, virgin beaches are typical in Lombok. Famous for its ikat handwoven textiles, the island has exceptional charm and is relatively undiscovered, except for the town of Senggigi, which is becoming a major resort area.

The two main islands offer a massive range of attractions to suit all interests:

Pura Agung Gunung Sari: This great temple on a hill at Gunung Sari, about four kilometers from Mataram, was the site of the infamous Puputan battle, fought on November 22, 1894, between Lombok’s last Balinese ruler, Anak Agung Nengah and followers, and the Dutch troops under General Van der Vetter’s command.

Pura Lingsar: This may be the only Hindu shrine in the world were both Hindus and Moslems come to worship. About 7 kilometers west of Narmada, it was built 1714 and rebuilt in 1878 to symbolize harmony and unity between the Hindu Balinese and Moslem Sasak population of the area, especially those who adhere to Lombok’s unique Wektu Telu school of Islam.

Mataram and Cakranegara: Mataram is the capital of the province, which has in the past decades joined with Ampenan, the port, and Cakranegara to become the province’s biggest urban complex. At the beginning of the 18th century, Mataram was the residence of the crown prince of Karang Asem, a kingdom in southern Bali. The ruler had his seat in Cakranegara. Lombok’s biggest Balinese temple is the Pura Meru in Cakranegara; it was built in 1720 by Anak Agung Made Karang. Nearby is Taman Mayura.

Sengkol, Pujut and Rambitan: Time seems to have frozen in these three villages in southern Lombok on the road from the capital to Kuta Beach. All the houses and barns are built in the age-old traditional style, and life continues daily here as it has for centuries.

Sukarare: This is a traditional weaving center village is located in the south of Cakranegara. Lombok is known for its brightly patterned songket cloth. The techniques, patterns and motifs have been handed down through the generations.

Taman Mayura: The Mayura Park is all that remains of the Karang Asam kingdom of Bali, who’s King A.A. Ngurah, structure called Balai Kambang, which once functioned as a legal court of Justice and a hall for important meetings.

Batu Bolong Beach: Located 9 km from downtown Mataram, this beach has a huge rock with a hole in it. A Hindu temple lies on top overlooking the Lombok Straits to majestic Mount Agung of Bali.

Kuta Beach: Also known as Putri Nyale Beach. On the south coast of central Lombok, it is one of the most scenic mid unspoilt. From Kuta to Tanjung Aan (Cape Aan) is five km away, stretches an unbroken expanse of clean white sand lapped by waves of the Indian Ocean. Kuta is safe for bathing and swimming.

Gunung Rinjani: A 3,726 meter active volcano, is one of the tallest mountains of Indonesia. In the basin of the volcano’s huge caldera lies the sickleshaped Crater Lake, Segara Anakan, surrounded by steep walls. The mountain is popular with hikers. Sembalun Bumbung and Sembalun Lawang are two traditional Sasak villages on the slopes of Rinjani.

Narmada Park: 11 kilometers from the east of Mataram, was built in 1727 by King Anak Agung Gede Ngurah Karang Asem as both pleasure garden and place to worship Shiva. Its big pool is said to represent Segara Anakan, the Crater Lake on the volcano Rinjani, where they used to make offerings by throwing valuables into the water.

Mount Tambora, Sumbawa: Not active at present, the 2,820 meter Tambora is notorious for its savage eruption on April 5 – July 15, 1815. Falling debris, hot gases and lava streams killed more than 12,000 people. Some 44,000 more perished of hunger in the aftermath of the explosion. The top, now an immense caldera, has two distinctly colored lakes. From the rim of the crater, the breathtaking view over the rest of the island includes Mt. Rinjani and the island of Lombok rising out of the sea.

Sape, Sumbawa: Shipwrights still make sailboats the traditional way in this port town on Sumbawa’s east coast. Sape is a convenient point of departure for trips to Komodo Island across the strait, home of the prehistoric Komodo lizard.

Hu ‘u Beach, Dompu Regency: This gorgeous white sand beach is one of Indonesia’s surfing meccas and located at 37 km from Dompu. An International competition held July in here, considered as one of the best surfing areas in the world.

Regular shuttle flights from Bali and Surabaya as well as ferries, provide excellent transportation links between the islands.