Things to do in Jambi – Sumatra 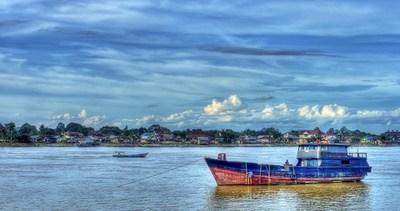 A lot of travellers seem to bypass the province of Jambi and even the city itself much preferring to travel on to Medan and other places. Such is their loss because the province has so much to offer in terms of beauty, culture and history. With total area of about 5,343,700 hectares Jambi consists of 9 regencies and its terrain varies from low land areas in the east and hills and mountainous in the west. Most of the mountainous areas are to be found in the regency of Kerinci. Jambi has a wealth biodiversity as you will find in the four national parks; Kerinci Seblat National Park, Berbak National Park, Bukit Dua Belas National Park, and Bukit Tiga Puluh National Park. The province of Jambi is located on the east coast of Central Sumatra faces to Malaka Straits sharing borders with four other provinces in Sumatra and has long been a melting pot of different ethnic groups.

The earliest inhabitants were the Kubus, who were among the first wave of Malays to migrate to Sumatra. The ancient kingdom of Melayu developed and grew in Jambi and maintained relations with the mighty kingdoms of Sriwijaya, Majapahit and Singasari. The Buddhist Empire of Sriwijaya, prospered and grew along the Musi River bank in South Sumatra well over a thousand years ago. The city of Jambi is steeped in history and it is well worth staying here for a week and utilise it as a base to explore the rest of the region as well as the city itself.

Batik & Handicraft Atelier: Located about 2 klms from the centre of the town of Jambi, this place is a centre for the Jambi-style Batik, plait work and agate handicraft. Surprisingly the centre is run by women!

The lake is located 20 km from Sungai Penuh. This is a popular tourist spot with beautiful panoramas and a cool place to chill-out. Accommodation is available on the side of the lake.

Kerinci Seblat National Park is located in the Bukit Barisan Mountains and occupies a total area of 1,484,650 hectares. Here you will find a great variety of animal species; elephants, Sumatran tigers, Sumatran rhino, tapirs, panthers, deer, wild goats, primates, crocodiles, birds and reptiles amongst others. There is great hiking in this park.

Mount Kerinci is the highest mountain on the island of Sumatra and it is popular with mountain climbers. The nearest village and climber’s base is Kersik Tuo, near Kayu Aro, Kerinci. The route is marked by signs, posted at half kilometre intervals. The best season to visit is January to October. The best way to get there is to fly to Padang and then go to the town of Sungai Penuh in the district of Kerinci in Jambi Province which is 7 – 8 hours drive from Padang or 278 km. Otherwise, you can go to the village of Kersik Tuo with a distance of 211 km from Padang or approximately 5 – 6 hours drive.

The temple is 30 km northeast of Jambi, along the Batanghari River. The site is considered one of the richest archaeological sites on the island of Sumatra. The eight temple-like Bhuddist structures were probably built around the 14th century. In 1982, a 32 centimetre tall female bronze statue was found at Koto Kandis, in Muara Sabak. It was believed to be the goddess Laksmi, holding a lotus bud in her right hand and an oil lamp in her left.

Bukit Duabelas Nature Reserve is located in the Pauh subdistrict, 60 km from Bangko in the Sarolangun Bangko regency. It covers 28,703 hectares andis home to deer, monkeys, bears, wild pigs, elephants, snakes, iguanas and many species of birds. Small lakes are found in its surroundings and many small streams discharge into the Batanghari River. This nature reserve is also home to 1,000 people of the Kubu (Anak Dalam) tribe.