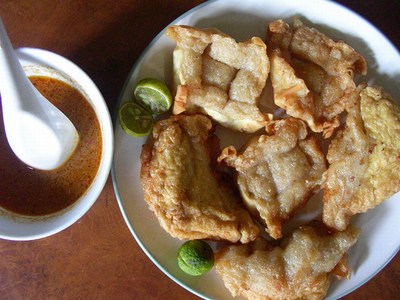 Every island and principality, every town and village throughout the archipelago has its own speciality food but the one place where you will find some of the finest cuisine in Indonesia is in Bandung. From food sold on the street by vendors (kaki lima) to haute cuisine, every visitor will be able to find something to their liking in the Paris of Java as Bandung is fondly known. The Sudanese (residents of West Java) are great lovers of food and who isn’t! Sundanese food tends to be bland yet tasty unless you add sambal dadak (chili and other ingredients grinded together) to your food. Sundanese people eat vegetables a lot. Sometimes they even eat raw vegetables (called lalap or lalapan) like cucumbers, tomatoes, coriander leaves, eggplants, cabbages, lettuces, and so on. Lalapan is usually accompanied by sambal dadak.

Probably one of the most well known dishes, timbel, consists of nasi timbel, lalapan, sambal dadak, a piece of chicken (fried or roasted Sundanese style), fried beancurd, fried tempeh, a slice of jambal (salted fish). If you want to, you can add gepuk (slices of beef, mixed in traditional herbs, then fried).

Pepes (main ingredients such as fish, chicken, mushroom, etc.) are mixed with crushed and blended herbs, folded into a banana leaf, then steamed until they’re ready to eat), sauteed greens, and others. Nasi timbel is a favourite among locals and visitors. Batagor baso tahu goreng (literally means, fried meatballs & beancurd) is one of the most sought after specialty. This is made from blended fish and beancurd, with a special peanut sauce.

If you have a sweet tooth might fancy pisang molen. Then there is the Indonesian traditional pastry filled with banana and cheese. For a variation, try brownies kukus (steamed brownies). Es cendol, made of blended/grinded rice, palm sugar, and coconut milk. This drink is cooling on a hot day. On a colder day (if there ever was one!) you might want to taste bandrek or bajigur. Bandung also offers various milk products most notably, yoghurt. Basically there are two kinds of yoghurt in Bandung the thin one, and the thick one (French style). Another tasty delight is Cakue, a dish made of flour dough then fried. 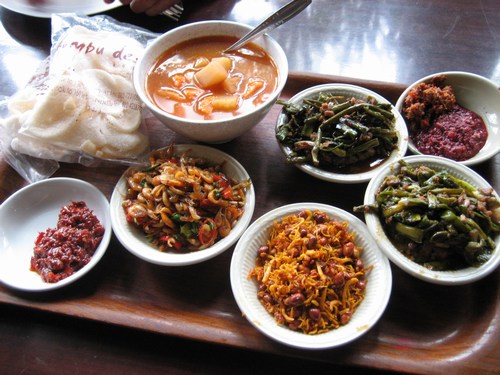 Bandung has numerous kinds of restaurants including Padang (food from West Sumatra), Chinese, Japanese, Korean, Western, Indian, and the list goes on.