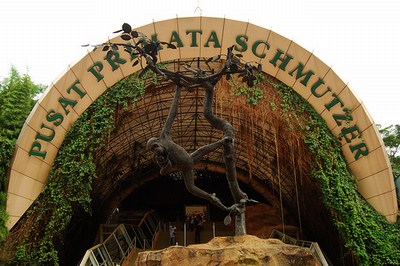 There are numerous refuges for primates scattered around the archipelago and most are in national parks where our nearest living relatives can live in relative safety. However, there is one primate institution that is not in a national park and that’s the Schmutzer Primate Centre located in the grounds of the Ragunan Zoo in Jakarta, West Java. The primate centre is one of the largest in the world and houses numerous different primate species; Gorillas, Chimpanzees and Orangutans, amongst others. The centre was designed in an innovative way whereas the animals can decide if they want to be seen! It is the only place in the world where natural food is grown in the primate enclosures. Its construction affords new ways of looking at the primates such as a seven meter high bridge that crosses part of the gorilla enclosure and a very long tunnel that guides you through the world of Orangutans and swinging canopy bridges.

Although a relatively new centre it has already received enormous praise from around the world for its natural habitat and the manner in which the primates are cared for. In fact, already there have been several births of young primates and what is excellent about this centre is it intends to contribute to the wild population by sending groups of healthy apes and monkeys back to the wild to be released there.

Note: You can’t bring food or drink inside the Schmutzer Primate Center. You are not allowed to feed the animals.