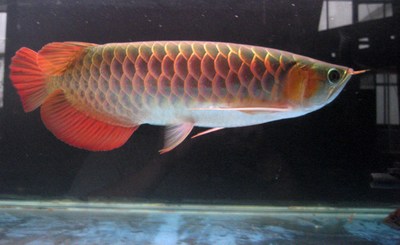 When I was a young kid growing up I was lucky enough to have fish tanks, two in fact; one for tropical fish and the other, freshwater fish. As I grew older I realised how wrong it is to keep any creature interned and these days as a staunch environmentalist, I advocate for the river and ocean fish stocks to be maintained. However, there are collectors in Indonesia who prize fish for display and pay top dollar prices just to obtain certain species. One of the species highly valued is the Arowana fish; a species that is endemic in the Kapuas River and Sentarum Lake, West Kalimantan. But, this is not the only place these fish are found. Throughout South-East Asia they are found in Vietnam, Myanmar, Thailand, Cambodia, and Malaysia. The difference being in the colours of the Arowana fish are recognised by specific geographic region. Asian Arowanas are considered lucky by many people, particularly those from Asian cultures. This reputation derives from the species’ resemblance to the Chinese dragon, considered an auspicious symbol.

However, it is the Arowana fish coloured red, super red, blood red, or chili red that is found only in the upper part of the Kapuas River in Kalimantan that are truly prized. Known locally as siluk the Arowana fish is bony with elongated bodies, whiskers similar to a catfish, a bony head and small fins on its body. They are truly a fascinating fish but also one that was listed as endangered by the 2006 IUCN Red List. There are a number of registered CITES breeders in Asia. Other nations restrict or prohibit possession of Asian Arowanas. You will also find a variety of Arowana fish in Sumatra but this species colour is not a dramatic as those of its counterpart in Kalimantan.