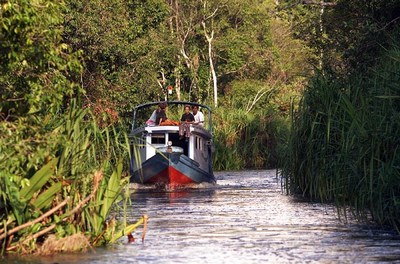 Tanjung Puting National Park is the largest and most diverse protected example of coastal tropical heath and peat swamp forest. It covers roughly 3,040 square kilometres and has low lying swampy terrain through which flow black water rivers. Towards the north, Tanjung Puting is characterized by gentle hills and gold-bearing alluvial plains. The area was originally declared as a game reserve in 1935 and a National Park in 1982. The park is widely recognised as an important genetic resource of great value for scientific research. The best known animals in Tanjung Puting National Park are the orangutans, although proboscis monkeys as well as seven other primate species are also present in the park.

Tanjung Puting is also listed as a Man And the Biosphere (MAB) Reserve. It occupies most of the peninsula between Teluk Kumai and the Seruyan River. There are three orangutan rehabilitation stations in the park which work to return orangutans to the wild.