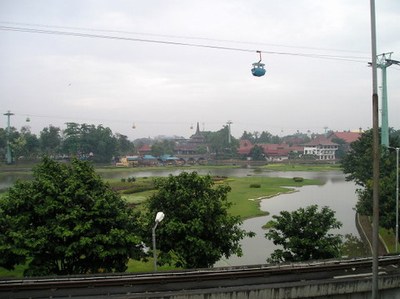 As much as most travellers would like, the idea of seeing all of Indonesia in the short time visas allow, it’s virtually impossible. However, there is a way to explore this magnificent archipelago and all without leaving one city. Just visit Taman Mini Indonesia Indah in Jakarta. This beautiful and extensive park was built as a showcase of the destinations in Indonesia and attracts hundreds of visitors daily, both internationally and locally. Here you will find the richness of the cultures of Indonesia replicated with all islands represented. For instance, there are traditional houses from all around the archipelago and, all around a shaped lake with numerous other fascinating attractions.

The idea was brainstorm of the late Ibu Tien Soeharto and construction of the park began in 1971 and it was officially inaugurated on April 20, 1975. Since its existence the park has continued to grow and develop. The bulk of the facilities at Taman Mini are made up of regional pavilions with more than twenty five pavilions to walk through. The diversity of culture, tradition, customs, forms and cultural objects are showcased and presented superbly. Her are some of the attractions:

Istana Anak-anak Indonesia: The Indonesia Children Castle featuring fairy tales painting from Indonesia and all over the world.

Taman Among Putro: An amusement park for children and fully equipped with games and fun activities.

Desa Wisata: When a day is not enough to explore TMII, there is Desa Wisata, a hostel for individual or groups visiting Taman Mini from outside of Jakarta to stay overnight.

Transportasi TMII: The means of transportation to get you around the “Archipelago”.

Titihan Samirono/Aeromovel: Another way to get around is the fast train, Aeromovel. This is an example of a fast and efficient train that could provide everyday mass transportation for Indonesia.

Sky Lift Indonesia (Kereta Gantung): The Sky Lift is great for an aerial tour of the park and one of the sights that will stay with you is a scale model of the islands of Indonesian archipelago set in a small lake.

Panggung Parkir Utara: The North Parking Stage is a permanent stage for various entertainment activities for visitors. Situated next to the Pancasila Flame Monument Plaza and belonging to the North Parking area the open stage has been built by the participation of private enterprise.