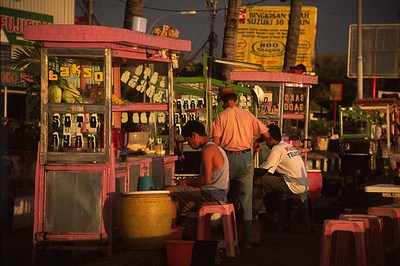 The descendants of the Torajans and Bugis peoples inhabit the south-eastern Peninsula of Sulawesi and the Buton group of islands. Due of the strong influence of the Islamic Bone Kingdom most of the people in this part of Sulawesi are Muslim. There are five diverse cultural groups: The Tolaki, Morunene, Buton, Muna (locally called the Wuna), and the Bajo. Most of the land area of Southeast Sulawesi is covered by natural jungle with extensive plantations of teak and ironwood, which are used for local handicraft and contribute to the local economy. For those who like challenging adventures and ecotourism this part of Sulawesi is ideal. Places like Lambusango and Kakenauwe that are both protected forests, Wakatobi Marine National Park and Basilika Islands. There are some of the best diving and snorkelling in Indonesia to be found in the waters around south-east Sulawesi and the jungles and forested areas are pure heaven for the hiker and explorer.

Here are a few places of interest in south-east Sulawesi:

The most fascinating cultural appeal of Buton Island is when the local people conduct ceremonies and celebratory folk events to welcome honoured guests. Food and cakes are offered to visitors and traditional dances are performed. The fine white sands of Nirwana Beach are located 12 km from the village of Baubau and it is a popular for snorkelling and swimming.

Napabale Lake is connected to the sea via a natural tunnel. At low tide strong swimmers can brave this span of water for an exciting and unusual experience. It is dangerous to attempt this feat during high tide as the water rises to only one half meters below the roof of the tunnel. Motonunu Lake is known for its clean, clear, dark-blue water. Both lakes are 15 km from Raha, the capital of Muna Regency, on Muna Island. They are accessible by sailboat, from Raha, in only 45 minutes.

The capital of Southeast Sulawesi Kendari lies of a sloping hill overlooking the beautiful Kendari Bay. This place is best explored on foot. Kendari artists are known for their artistic handicraft in traditional designs, using indigenous roots and ironwood. Silverworks from Kendari are widely known.

This pristine bay is only one and one half hours by car or speedboat from Kendari. The white sand beaches of Moramo Bay are host to a endless water activities and sports including sun bathing to water skiing, swimming and boating, and the snorkeling and diving in the crystal clear waters are superb.

Located 20 km to the north from Kendari, Batu Gong beach is a relatively new recreational resort along a 3 km white-sand beach. At the edge of the beach are huge stones, which when hit sound like a gong, hence the name of this area.

Wakatobi Marine National Park is lies just off the south-eastern tip of Sulawesi. It is a veritable paradise for snorkeling and scuba enthusiasts. It can be reached by chartered flight from Denpasar direct to Tomia or by shipline of PELNI which call in regularly at the Port of Bau-Bau.

Basilika derives from a group of islands just off the western-part of Buton – Batauga, Siompu, Liwutongkidi, Kadatua. Its atolls and coral reefs are spectacular. You can get to Basilika by a speed boat in just a half hour.

Moramo Waterfall passes a 2 km plateau, with 127 separate terrace plumes, the top of the waterfall being some 100 meters above its basin pool. There are seven main terraces each having its own natural bathing pool. Surrounded by lush jungle, this is the perfect place for those who love nature at its most pristine. Only 65 km east of Kendari, Moramo waterfall is easily accessible by car, or by crossing Moramo Bay by boat.