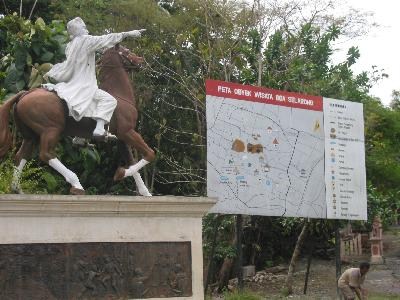 There are several sacred, culturally and historically important caves found in the areas outside of Yogyakarta in Central Java. Selarong Cave is one of those fascinating caves and is of historical importance. It was used as the headquarters of Prince Diponegoro in his fight against the colonial Dutch during 1825 to 1830. Interestingly, it is a man-made cave. Located 14 kilometers north of Yogyakarta near the village of Guwosari, Selarong cave has become a tourist attraction and the usual stalls associated with a tourism object have sprouted up. These include warungs, craft stalls and the ilk. I particularly liked this cave and found the guava trees planted there a botanical delight.

Around Selarong cave there are other interesting places such as Putri and Kakung caves. You will also find the Manikmoyo water spring and a cool waterfall.