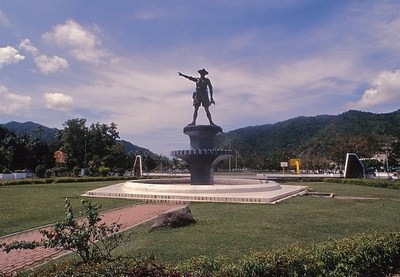 The city of Gorontalo is located at the eastern end of Lake Limboto and is the second largest city in North Sulawesi. It is a fabulous province to visit and offers a unique range of attractions. Picturesque with panoramic views the city lies at a point where three rivers flow into the sea. The Gorontalo Province is mostly a mountainous area. .In the south area of Gorontalo’s sea, known as Teluk Tomini, are a number of small islands. These islands are uninhabited and are beautifully surrounded by white sand beaches. This area is a haven for divers and snorkellers mainly because of its geographic location near the Equator. Subsequently, crystal clear waters offer divers a paradise under the sea. The forest of the mountainous panorama of Gorontalo are magnificent especially at Nani Wartabone and Nantu. There is so much to see and do in and around Gorantalo that one would need at least a week to see the fabulous attractions and perhaps one might even miss a few.

So to help you out with a bit of what’s on offer for your visit to the Gorontalo province here are some of the recommended places:

Otanaha Castle: In the past, the Kings of Gorontalo used Otanaha castle as a place of protection and defence. The panorama of Danau Limboto can be seen clearly from the castle of Otanaha, because the castle itself stands in the top of the highland. The castle is located approximately 8 km from the centre of Gorontalo city. Beside Otanaha castle, there are two more castles that also located in the same area, Otahiya and Ulupahu castles.

Nani Wartabone Monument: This is a historical monument of a local Gorontalo hero, named Nani Wartabone. He played an important role in the independence of Gorontalo. This monument is located in the centre of Taruna Remaja Gorontalo Park.

Rumah Adat Gorontalo: A traditional house located in the centre of Limboto. Also known as Bantayo Poboide, its Literal meaning is “Bantayo” meaning building and “Poboide” meaning place for meeting. This is a place where all activity related to the art and culture of Gorontalo happens. There are several rooms and each room has a different function.

Mesjid Hunto: Hunto This 300 year old mosque is one of the oldest in Gorontalo. The Mosque is located in the village of Siendeng in Gorontalo city. The main attraction of the mosque is without a doubt the Beduk (an Islamic traditional drum).

Pantai Olele: This beach is a gateway to an underwater paradise. The amazing beauty of underwater life in this area has amazed many international divers.

Limboto Lake: A village named Iluta located 10 km from the centre of Gorontalo, marks the entrance to this Lake. The unique characteristic of this lake lies in the variety of freshwater fish species. On the lake there is a landing field for amphibian planes.

Ayuhulalo Waterfall: Located in Ayuhulalo village it is about 5 km from the District of Boalemo. Its environment is refreshingly delightful because of the shady green woods with its everlasting and fresh water surrounding the area.

Bajo’s Tribe Villages (Tilamuta, Torosiaje, Popayato): Bajo’s tribe live in a group and have their own culture and way of life. Mostly boat people, they work as fisherman. The Bajo’s tribe still live in a boat called a Bangau. On Toro Pantai Island they cultivate pearls and sea grass.