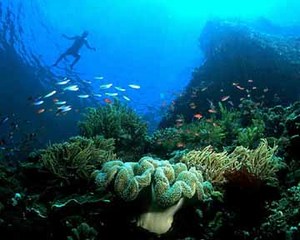 The coral reefs off Bunaken Island are a divers paradise and should not be missed while you are in Manado, Sulawesi. Relatively unspoiled and magnificent virgin reefs await divers and the drop-off walls at Liang cove has caves, gullies and caverns, harbouring an immense wealth of marine life. Spectacular reef formations begin at about 5 m depth and then plunges downward to form underwater vertical crevices with often reach depth on several hundred meters. On these beautiful reefs, a wonderful collection of marine life thrives. The Bunaken reef is world famous and is a chain of over forty five star dive spots. The Marine Park is spectacular with the greatest concentration of tropical fish and coral species. Clear, warm waters, light currents and calm seas allow easy access to the five islands of the Bunaken-Manado Tua National Marine Park which sits directly offshore of Manado.

Most of the diving can be found near Bunaken and Manado Tua because of their many excellent sites. Here area few of the best dives that will leave you in awe and yearning for more:

Muka Gereja is a pretty site with thousands of fishes in the shallows and deeper canyons that lead to the wall.

Barracuda Point, on northwest Montehage, is one of the furthest sites. A school of giant barracuda are regulars along with jacks and tuna.

This 60m (200ft) long German merchant ship sank near Molas Beach in 1942. It sits upright with the bow at 23m (78ft). The ship is split near amidships back to the stern, exposing the wheelhouse and cargo holds. Dives finish up on a nearby shallow reef. Expect 10-15m (30-50ft) visibility.

This long wall on Bunaken is divided into three sites: Lekuan I, II and III. Together they represent the park’s best. Steep walls are marked with deep crevices, sea fans and giant sponges. The shallows are filled with fishes. The wall, often protected from stronger currents, is frequented by bumphead parrotfish, turtles, and Napoleon wrasses.

Mandolin has a knockout reef crest and a wall that attracts thousands of fishes like schooling fusiliers, surgeonfish, unicornfish, and bannerfish. They are acclimated to divers and are easily approachable.

There are strong currents and lots of fishes on this long wall. The shallow reef isn’t as spectacular as some but there are turtles, sharks, eagle rays, and other big fishes in the blue. Overhangs and small caves mark the wall.

Tanjung Kopi is a nice wall with a small school of barracuda and lots of sweetlips. Visibility in the shallows is not terrific but the numbers of fishes make up for it. Nudibranches and fire gobies are easy to spot here.

Siladen has a beautiful wall of soft corals that bloom when the current is running. The shallows are nice with lots of fishes and schooling snappers.