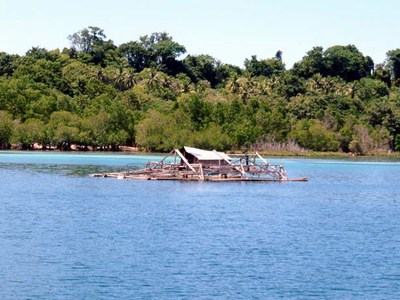 Located in the South China Sea, the islands of Bangka and Belitung are interesting places to visit not only for their historical and architectural attractions but also as places to unwind for a few days before you carry on exploring the rest of Sumatra. Surrounding these two main islands are 240 smaller islands each worth a bit of attention if you have the time. Often referred to in a combination name, Bangka Belitung is part of the regional ecosystem in the archipelago of Indonesia and also affords excellent scuba-diving, snorkelling, good fishing and sailing in open waters. The name Bangka is derived from the word wangka, which means tin. This word was also written in a Sriwijaya stone inscription dated 686AD and discovered near the town of Kota Kapur in West Bangka. Because of its relative isolation as an island Bangka is fuelled by the tin trade with its only other produce being white pepper. Nonetheless, the island chain is well worth a visit.

There are approximately 55 Chinese or Buddhist temples on Bangka and all are still in use. The majority of the Chinese are direct descendants of the coolies who worked the tin mines. The oldest temple is in Batu Rusa, a village along the road from Pangkalpinang to Sungai Liat. A beautifully decorated temple is found near Tayu in the north of Bangka Island. There are so many more interesting places and here are a few:

Belitung Island has stayed natural and unspoilt. Coming here is a bit of an adventure where the traveller has to be more a tad self-sufficient and adaptable and come prepared. Bring things like swimwear, diving equipment, medicines, cosmetics, sunglasses and sun cream etc.

Tanjung Pandan is the capital city of Babel. The topography consists of lowland and some small areas of swamp while in the middle part there is highland in groups of 150-200 meters above the sea level. It is the second biggest tin producer in Indonesia.

Matras and Parai Tenggiri Beaches in the northeast of Bangka, 48 km. from Pangkal Pinang and 12 km from Sungai Liat. The beach is about 3 kilometres long and its width is almost 30 metres. Parai, a beach set between rocky capes is an ideal location for relaxing and swimming. Local fishermen moor their vessels here after a day of fishing, giving the beach the picturesque feel of a fishing village.

Mount Menumbung (355 m) a rather high hill in the neighbourhood of Mentok (North West Bangka) stands as a memorial to the history of the Indonesian nation. A guest house was built here by the Dutch in 1932 was used to house the former President Soekarno and Vice-President Hatta during their imprisonment from February to July 1949.

Manggar is about 90 km from Tanjungpandan. The main economy activity in Manggar was tin mining. There are many nice places that can be visited like Serdang beach, Burung Mandi beach, Malang Lepau beach, Pengepangan beach, Tirta Surya the natural swimming pool, Payak Lake, Kwan In Chinese temple.

Remodong Beach in North Bangka is a favourite place to enjoy the sunset as the beach faces the west. Tourist facilities are also available on this beach.

Garuda Indonesia Airlines has daily flights to Palembang from the Soekarno Hatta Airport in Jakarta. Then catch a boat across to the islands.