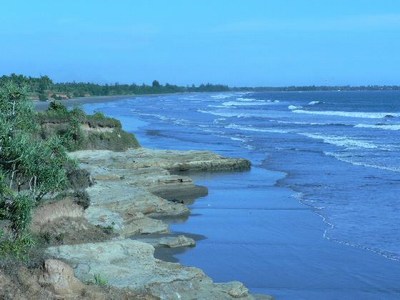 Formerly known as Bencoden the city of Bengkulu is a fascinating place with great places to visit and see. Bengkulu was the place where Sir Stamford Raffles first entered Indonesia and there are still remains of British influence in the city and surrounding areas. The primary crops produced in the area are pepper, coffee, nutmeg, and sugar cane with these products seen in the local markets which are in themselves a fabulous attraction. The province of Bengkulu is easily reached by land, or by air. There are regular buses direct from Medan, Padang or Jakarta but if flying is your thing then there are flights three times a day. Domestic ships from Jakarta, Padang and Medan stop over in Baai harbour, Bengkulu. The variety of attractions in and around the city will please all tastes in travel and there is not a shortage of adventure or for just taking time to chill-out.

Soekarno’s Residence. The first President of Indonesia was exiled to Bengkulu by the Dutch in 1938. Today the house is a museum, containing his books, clothes, photos and his bicycle. The house is open 8 am to 2 pm, Tuesday to Thursday, Friday 8 am to 11 am, and Saturday 8 am to 12 pm.

Fort Marlborough. The British or ‘Raffles’ Fort, was built between 1714 and 1719 and was famous as the second-strongest fort built by British in Asia, Fort George in Madras, India being the first. It was restored and opened to the public.

Bukit Kaba Volcanic Crater is 104 km from Bengkulu and about 19 km from Curup, lies 1,937 m above sea level. There are two immense sulphuric calderas with twelve active craters. Beautiful panoramic views and cool mountain air make this a pleasant stop for a couple of days. There are popular hot springs near Curup at Suban.

Enggano Island is covered by dense rain forest filled with buffalo, pigs and cattle. The people have lived in virtual isolation for centuries, their traditional culture still very much alive today. Native art forms include the intriguing Enggano dances. The island can be reached by boat from either Baai Harbour or Bintuhan seaport.

Tikus Islands is excellent for fishing, snorkeling and diving with easy access by speed-boat from the old harbour in Bengkulu.