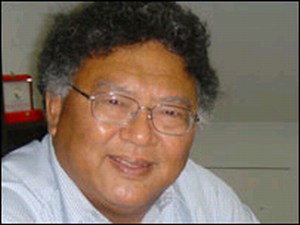 In Indonesia, the media should be cautious when covering four topics — suku, agama, ras, antar golongan (ethnicity, religion, race and the relationship between groups), better known as the acronym SARA — to avoid any legal consequences. But in a new talk show on ANTV, guests must refrain from talking about weight, or else the host, Wimar Witoelar, may become angry. The host of the half-hour-long show Perspektif Wimar (Wimar’s Perspective) was recently offended when he thought his co-host, Cathy Sharon, commented on his large body size.

But after a commercial break on the Tuesday program, Wimar and Cathy, a former MTV Indonesia VJ, laughed and told viewers of the private television station that it was all just a joke according to A. Junaidi.

Wimar often laughs — sometimes a bit too much — or satirically jokes about serious arguments put forward by his forthright guests, especially ministers or politicians.

He said he was inspired by the style of Jon Stewart, host of The Daily Show, a Peabody and Emmy Award-winning American television program produced by and aired on Comedy Central.
“Jon Stewart is a comedian-turned-intellectual. Whereas I’m an intellectual-turned-comedian,” Wimar, who is also a professor of Journalism and Public Relations at Deakin University in Melbourne, Australia, said in an interview. The graduate of the Bandung Institute of Technology and George Washington University admitted that Jay Leno, host of the Tonight Show, another Emmy-winning talk show aired in NBC, also inspired him.

Born on July 14, 1945 in Padalarang, West Java, Wimar often grills government officials and legislators on his show and makes fun of their answers without making them feel too embarrassed.

The show’s Friday guest, Yuddy Chrisnandi of the Golkar Party, admitted the current House of Representatives’ move to question the government on the alleged misuse of the Bank Indonesia Liquidity Assistance fund, worth hundreds of trillions of rupiah, was merely a political game.

During the show, Wimar criticized Golkar and its current chairman, Jusuf Kalla, who is also the country’s Vice President, and the party’s former patron and late president Soeharto.

Besides politics, the Friday show also discussed topics ranging from home schooling to breast feeding, with former Playboy model Tiara Lestari and her eight-month-old daughter as guests.
Wimar’s vocal bravado is nothing new. Last year, his talk show on Jak TV was dropped by the station’s management after he repeatedly criticized Jakarta governor candidate Fauzi Bowo, who was deputy governor at the time.

The father of two sons said he was not afraid that his new talk show would be aborted by ANTV’s owner, the family of Aburizal Bakrie, who is also Coordinating Minister for People’s Welfare.

“I think the family would not drop my show. They do not control the station any longer,” said Wimar, who was recently appointed the non-executive director at ANTV representing Hong Kong-based STAR TV, a global media network controlled by tycoon Rupert Murdoch.

The Bakrie family, which still owns 80 percent of ANTV, is now focusing its attention on the newly acquired tvOne television station (formerly known as Lativi), leaving Star TV — which owns 20 percent of ANTV — to manage the local station.

Wimar’s involvement in ANTV began after his consulting firm, Intermatrix, was asked to be the advisor for Star TV in Indonesia.

“Star TV wanted to enter many businesses here, not just ANTV.”
The former spokesman of president Abdurrahman Wahid has long been known as a consultant for many top companies, including state mining firms PT Bukit Asam, PT Timah and PT Perusahaan Gas Nasional.

While meeting people in power is always on his daily agenda, Wimar said he actually learned a lot from ordinary people.

“I’ve gained many new perspectives from ordinary people,” said Wimar, who was accompanied by three female assistants — referred to as “Wimar’s angels” — during the interview with the Post in a restaurant at Plaza Semanggi, in Central Jakarta.

Wimar’s lose friends and his assistants fondly call him WW (pronounce “whey whey”), which in Javanese language means a kind of frightful demon with long hair.

Perspektif Wimar first aired on March 24 and has already managed to attract many viewers — with dozens even sharing their comments after the show on Wimar’s blog, Perspektif Online, at www.perspektif.net.

Some of the viewers have even asked if the show, which is broadcast live at 6 a.m. from Monday to Thursday, could be extended to one hour.

“I’m happy that many people have requested the show be extended. But we will keep it a 30-minute program. TV is naturally designed for short programs,” said Wimar, who is also the author of several books and a print-media columnist.

Learning from his previous talk show, Wimar is confident his current show will last longer, as his team supported by ANTV management currently prepare other activities to promote Perspektif Wimar.

“As with other TV programs, we have signed a contract for 66 episodes. This could be extended.”

“I have no intention of becoming number one. I’m just happy if my show becomes a popular choice among other similar TV programs.”