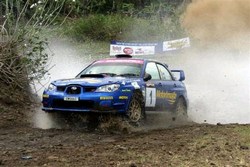 Countryside roads and sugarcane plantations in Indonesia’s South Sulawesi province will host a World Rally Championship (WRC) event in 2010. The world auto sports governing body FIA has sent an advisor to inspect the location and give necessary inputs to local organizers, major national newspaper Kompas reported. FIA official Piero Sodano arrived in the province Tuesday for a three-day monitoring task. He is slated to inspect not only the tracks in Takalar, about 30 km from the provincial capital Makassar, but also the hotels and other facilities for participating teams. Indonesia has been struggling to regain a WRC rally over the last three years and finally won the seventh event in 2010. The sprawling archipelago last hosted a WRC rally in North Sumatra province in 1996.