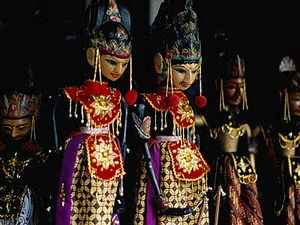 Wayang golek, or wooden puppets, are usually presented on stage in front of hundreds of spectators, in a show that lasts all night. But in West Java, these puppets have ventured off the stage and into the souvenir and interior decoration market. Many of these puppets come from a hamlet located far away from the West Java capital of Bandung where they are often found. The Heubeul Isuk hamlet, some 10 kilometers from the Bandung regency town of Soreang and the Ciwidey tea plantations, has long been known as a center that produces wayang golek. Puppets from Heubeul Isuk are mostly made based on orders from puppet masters. The puppets meet the standards for performances, they are not just for decoration. This is why Heubeul Isuk puppets are more expensive

A local puppet trader, Deden, 30, said the wooden puppets from Heubeul Isuk hamlet were made meticulously and were actually not designed as souvenirs. According to Z. Yamani. A show puppet is priced between Rp 100,000 (US$11) and Rp 150,000. While a puppet souvenir, which is smaller, can be purchased for Rp 15,000.

On a lucky week day, Deden can sell one or two of his puppets. But on the weekends, he said, he can sell up to four or five puppets.

Deden said he did not run his business in the city because he was worried about competing with other sellers.

In the city, he said, people can buy wooden puppets at a low price but the materials are not as good and the details are poor.

“Besides, I don’t have any capital to open a shop in the city,” he said.

Another wayang golek maker from Heubeul Isuk, Nanang, 30, said it took him two or three days to make a puppet, depending on the ornaments.

Nanang not only makes puppets but also hires them out.

Sometimes, puppet masters who want to perform come to him to rent a set of his puppets or certain puppet characters.

Nanang was introduced to the wayang golek world at a very young age, as his father was a puppet master. He can sell up to 50 puppets in a month; both performance and souvenir puppets.
He sometimes makes giant puppets measuring up to two meters, which are ordered by hotels or restaurants that need them for decorations.

Nanang said his customers usually preferred comical characters depicting villagers, like the characters Cepot and Astrajingga. But some pick other characters, depending on their needs and wishes.

“A giant puppet can take one month to make.”

The father of one said he enjoyed making puppets for a living and did not want to turn to another profession.