They are less than two square meters wide and pop up in front of you every 100 steps in busy roads or at least every two alleys in quiet neighbourhoods. They are Warung Rokok.

Stop in front of one and ask for anything you like: cigarettes, tissue, soap, a bottle of cold drink, or even a cup of hot coffee or a bowl of instant noodle in some places. In Jakarta, Anissa S. Febrina discovers their magic.

Watch out for these magical boxes!

Warung rokok, a local term for a cigarette vendor stall, is a a practical way to earn a living, the forefront of consumer goods distribution network and — particularly nowadays — an increasingly exploited means of promotion for cigarette companies.

No official statistics are available on the warungs, but there are thought to be more than 1,000 of the street stalls spread throughout the Greater Jakarta area.

There are around 85 stalls along the street stretching from South Jakarta’s Pondok Indah to Patal Senayan alone.

In Jakarta, most of the vendors came from Kuningan, West Java. One successful vendor will take his relatives along to mind his stall while he tries opening another somewhere else. 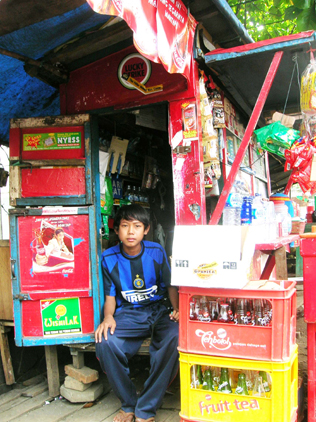 And it snowballs every time.

As simple as it may seem, this informal economic activity is not done without any “feasibility studies.”

“We usually do day and night surveys to see how crowded the street is before deciding to start selling in one,” said Tabroh, a 60-year old seasoned stall owner in Ampera, South Jakarta.

“All you need to do after you decide to stay in one place is contact the local district officer, and, you know … give them a contribution,” he said.

During his 15 years of selling from inside his bright red wheeled stall, this owner of five stalls has moved four times, from as far away as Tangerang, Banten, to his current spot.

“That is the good thing about this business. Once it is not lucrative to stay in one place, you can find other spots,” the father of three said.

Lucrative, for Tabroh, means daily takings ranging from Rp 300,000 to Rp 600,000, which can accumulate to as much as Rp 3 million of monthly net profit.

The security fee is for assuring that his stall — and whatever is stuffed in it — is safe from thieves.

And yes, the magical boxes do have electricity, although sad to say that although the vendors pay for it, the services are actually obtained illegally by connecting to the closest building’s power line.

Vendors need not shop to often to keep their stock running, as cigarette, snack and bottled beverage distributors are weekly visitors.

“The more frequently you buy from one distributor, the cheaper you get the goods,” said Eddy Sumantri, a vendor at Pulogadung Bus Terminal said. “If you open your stall in an area where the competition is tight, a Rp 100 difference in price can mean a lot.”

Eddy provides more than cigarettes and snacks at his stall. With a simple kerosene stove and a couple of bowls and glasses, he is able to serve bus drivers, his most frequent customers, a quick breakfast or dinner. All he needs to add to his worn-out stall is a wooden bench, a thin old board on top of it and a banner to cover those eating beside his shelter.

Vendors in main thoroughfares are probably more fortunate than Eddy and his worn out stall.

These vendors are often provided with attractive stalls for free, designed and built by cigarette companies looking for a creative below-the-line promotion media.

“They replaced my old stall with this one. It’s free and they have paid the tax,” 35-year old Supriyadi said. “It’s more noticeable and good for my business.”

Big business, small business and consumers. It’s all about the relationship.