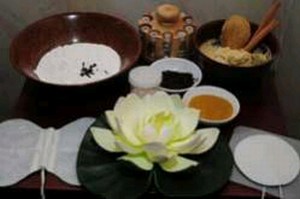 The room is bathed in soft light. Your batik robe flows around you as you settle onto the special padded seat. A delicious smell of herbs envelops you as the glowing coals in the chamber below gently smoke your … your … excuse me? Yes, you heard right. This is a vagina spa, and the focus of all this attention is Miss V, as Indonesians coyly call it. Penguapan (steaming) isn’t all V-spas offer, though. They often provide a wide range of services including massages, body wraps and facials. The one I visited, VG Spa run by celebrity sexologist Dr. Boyke Nugraha, is tucked into a little maze of rooms overlooking a busy street in Tebet, South Jakarta. All the rooms are private: mine was small and simple, refreshingly free of the fake-expensive decorations that often pass for luxury in Jakarta. A masseuse handed me a pair of disposable underwear and a shower cap and told me to undress and lie on the table. She covered me with a towel, and got to work.

I have learned to fear massages in Indonesia. The practitioners often seem bent on destroying every muscle in your body. This rubdown was both deep and gentle, however, with the added bonus of a scrubbing lotion that felt pleasantly rough as Trish Anderton explains.

After a shower, it was time to steam in the incredibly small sauna. With the little window in front of your face shut, you feel like you’re in a wooden space capsule closely orbiting Mars. Luckily you can slide the window open, which eases both the heat and the sense of claustrophobia.

Afterward, as I lay recovering in a bubble bath, I smelled smoke and heard the gentle crackle of a fire. At last! The main event!

The masseuse handed me a towel, followed by a pair of slippers and a drape made out of batik. The drape has an elasticized hole for your head . The cloth billowed as I walked over to the Toilet of Fire: a padded seat with a hole in the middle, positioned over a small chamber glowing with coals.

As I settled down on the seat, the smoke gathered inside the drape, escaping in wispy tendrils under my nose. The heat was pleasant at first. After several minutes, just when the fire was threatening to get a little too hot, the masseuse declared my penguapan complete. As I put my clothes back on, I noticed my skin felt soft and silky from all the scrubbing and soaking.

Vagina spas make some rather fanciful claims about their services. The VG Spa pamphlet claims to “return vitality to the vagina” and even “give a sensation of virginity” – whatever that means.

I can’t say I noticed anything that extreme. I did have one lingering effect, though; for about a day, I kept catching whiffs of a smokey-herb scent on my skin. It smelled a little like incense, and it took me a while to figure out what it reminded me of. Then it hit me: church! It was a pleasant smell, certainly, but given where I got it, the association seemed a little odd.