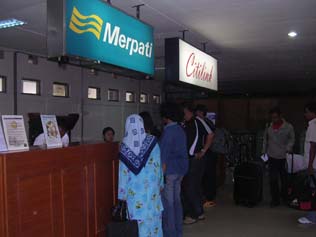 While it seemed doomed last year, troubled PT Merpati Nusantara Airlines is beginning to see the light at the end of the tunnel thanks to a restructuring process that appears to be paying off.

This year, boosted by the reopening of several former routes and the refurbished of its fleet, the company hopes to generate total revenue of Rp 2 trillion (about US$212.8 million), and is looking forward to a steady 30 percent growth over the next two years.

“I think we have emerged from the restructuring process. We are at a growth stage now. We are continuing to add more routes and flights, and further consolidate our operations so as to regain our foothold in the domestic market,” executive vice president for commercial affairs, Jaka Pujiono said.

Jaka said that the focus of the restructuring was the reestablishment of former routes that were closed during the company’s dark days, and the opening up of new, profitable markets in remote areas of the archipelago.

Merpati recently reestablished its Jakarta-Palembang,
Jakarta-Ambon, Banjar-Balikpapan and Bandung-Yogyakarta services, and increased its Jakarta-Papua flights to five times a day. In addition, it also expects to commence a Jakarta-Tanjung Pinang, Riau, service on Sept. 24.

“Merpati is probably the only airline that can deliver connecting flights, in all its operations, to remote areas of the archipelago. That is why our services are useful for mining company workers, government officials and scientists who need flights to remote areas,” Jaka said.

On top of that, it has bought three 56-seater MA-60 turbo-jet propeller aircraft made by China’s Xian Aircraft Industrial Corporation, and expects to take delivery of another 12 of these in the following months.

“Many people may doubt Chinese products, but they should know that the engines and parts are made in the West. The engine is made by Pratt & Whitney from Canada, while the propellers are being made by Hamilton Sundstrand from the U.S.,” Jaka explained.

“These days, no single production chain can be carried out in a single country,” he said.

The restructuring process began when the government agreed in March, 2006, to inject Rp 450 billion in bailout funds to help cover the state-owned airline’s Rp 1.7 trillion in debt, and the company’s cash-flow deficit of up to Rp 20 billion per month at the time.

About Rp 150 billion was allocated to pay arrears in aircraft rentals and maintenance costs, Rp 180 billion for debt restructuring, and Rp 120 billion for severance pay and human resources development programs.

In terms of financial performance, the company reported that as of the end of June this year, its operating revenues amounted to Rp 755.3 billion, while the total number of passengers stood at 1.2 million, with a 77 percent load factor.

This is likely to more than double by the end of the year as the peak season nears, with the end of Ramadhan coming in November, where the country usually sees a massive once-a-year migration of people to their hometowns.

As for the remaining debts, Jaka said that the company had negotiated deals with a number of its creditors and was still in talks with others. Among Merpati’s major creditors are Bank Mandiri (Rp 164 billion), Bank Danamon (Rp 95 billion) and the government (Rp 92 billion).

The company also expects to sell a stake this year in the Merpati Maintenance Facility (MMF), with the proceeds expected to be reinvested in the MMF.

“Our development program is moving in the right direction. We’ve been reborn and regain our supremacy in the domestic market. For the future, we will increase the number of our regional flights,” Jaka said.