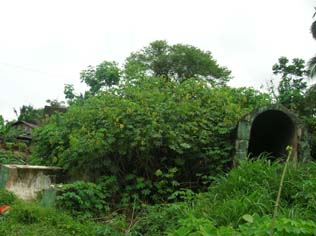 Although Japan occupied Indonesia for only three years during World War II, they left many historical buildings that are now part of Indonesia’s heritage and could become assets for the tourist industry.

In Palembang, for example, there are at least 15 buildings formerly used by the Japanese. In Tanjung Batu and Ketiau, Ogan Ilir Regency, there are dozens of buildings, tunnels, bunkers for storing weapons and even an old airplane base. There are believed to be even more of these historical sites in other parts of South Sumatra.

Unfortunately not all have been well preserved. In fact, few people are aware of the history of the old buildings.

“I don’t know the actual history of any building. All I know is about our heritage,” said Rihadi Ruliansyah, 14, a junior high school student from Negeri Tanjung Batu.

In Tanjung Batu village there are around 10 buildings that were used by Japanese troops for many purposes, including as kitchens, military headquarters and armories. There’s also an air base in Ketiau village.

There are many stories about these old Japanese buildings. Some older people in Tanjung Batu say the buildings had multiple purposes and that some were barracks. They also believed that some of the buildings were used to house precious loot that the Japanese had plundered during their advance through Southeast Asia.

“In the past young people tried to find the place where they believed the Japanese kept their stolen treasure, but till now they’ve never been successful,” said Muhammad Zaini, 58, a resident of Tanjung Batu.

Many people were happy to recount tales of their hunt for the supposed Japanese treasure in Tanjung Batu and elsewhere. Some employed conventional means, others tried a metaphysical approach using paranormals — but none were rewarded with success.

Today, many former Japanese buildings and earthworks can no longer be identified. However there are places where past use can be revealed; these include land mounds in strange locations, like a plantation or in the middle of the jungle.

Rahman Rasyidi, head of Ogan Ilir regency’s Tourism, Art, Youth Affairs and Sports Office said many former Japanese buildings remained in the region. However he confessed that his office didn’t have enough money to preserve them as tourist attractions.

“We haven’t been able to develop our tourism assets,” he said in his office in Idralaya. “We can only make reports.”

Rahman Rasyidi said he hoped links could be developed between the local government and private companies or the Japanese government, so together they could preserve these potential tourist attractions.

Palembang city has 15 examples of buildings from the Japanese occupation with many others in outlying areas. These include underground shelters and bunkers for protection against attack.

Many Japanese defense complexes remain in the region in places like Pulokerto subdistrict, Gandus regency, on Jl. Sudirman, beside the Charitas Christian Hospital, on Jl. AKBP H Umar, Ariokemuning subdistrict, and in the area of Kertapati, I Ulu regency and 15 Ulu, Karya Jaya. In Plaju there’s a fortress-like building located in Lorong Sikam.

Other examples is the Japanese soldiers’ cemetery in Talang Kerikil, and the barracks in Tegal Binangun, Plaju Darat.

People have either forgotten the existence of these structures, or never knew that this painful part of the country’s history was so close.

In some locations the land has been cultivated or excavated for new buildings. But in the memories of the local people these are still places built by the Dutch to face the Japanese forces.

These defenses were built to withstand attack and the tropical heat and rain, and they’ve been well tested over the decades. The walls on one bunker were made from strong concrete, 0.25 meters thick and 2.4 meters high.

On Jl. Joko, near the bunker, there’s a tunnel. The entrance to the tunnel, which is believed to lead to the bunker, is still there. And so does the tunnel, though its length hasn’t been measured.

It’s believed that the tunnel is long and winding and still in good condition. However because the interior is dark and slippery, conditions inside aren’t known.

The remains of nine Japanese defense complexes can still be seen. They include sites at Jl. Jendral Sudirman, next to Charitas Christian Hospital, Jl. AKBP H Umar in Ario Kemuning regency, located behind the market at kilometer 5 Palembang.

The defense complex beside Charitas is believed to cover one hectare. The main building measures 32 x 15 meters and was made from strong, half-meter thick concrete. The walls are two meters high.

Access to this place is via concrete stairs. There’s also a 100-meter long tunnel that’s believed to get close to the Musi River.

This is thought to be an escape tunnel. But the tunnel is in a bad condition; it hasn’t been looked after properly and is impossible to enter. However the strength of the defense structures can be judged from the remaining 5 x 4 meter artillery foundations.

On Jl. AKBP H Umar, the 4,710 meter-wide building ruins are still strong and clearly visible. However, as at the other sites, the condition of the building and tunnel isn’t good.

The main 20 x 20 meter building is like a bunker. At the entrance door there’s the entrance to a 2 x 1.5 meter tunnel. This gate is well known to the people as the Japanese Cave. On top of the tunnel are the foundations of an artillery piece.

A few meters from the main building are the remains of a 6 x 6 meter underground house. It was certainly below ground many years ago — but not now. Surrounding it are residents’ houses.

The other ruined defense complex is located on Jl. Demak 1 Ulu subdistrict, Palembang. There are at least seven artillery bases here, originally built to repulse air attacks. Each has a diameter of 5.6 meters and stands 1.15 meters high.

There’s another old defense complex on Melati Island, Keramasan, Kertapati. This is like a small airplane field.

In 16 Ulu Palembang regency there are other remains of Japanese buildings. These are believed to have been the foundations for anti-aircraft guns, and can be clearly seen.

In the Sikam Darat corridor, Plaju, is a twin fortress measuring 8 x 6 meters in an attractive location. Even though it’s no longer complete, the remains of the building are still quite strong.

There’s also a strange dome-shaped building on Jl. Tegal Binangun, Perlindungan corridor, Plaju. The building diameter is 14 meters and the top is 3.5 meters high. The walls are 0.9 meters thick, and altogether it’s a most unusual construction. In this area the Japanese army headquarters were located, and the street is known as Jl. Japan.

Not far from this building is a complex that’s believed to have been built for artillery defenses. The building’s concrete wall is 1.5-meters high supporting concrete columns. Some of the foundations built as a defense against air attack are still intact.
Jl. Japan is still used as a thoroughfare. This is the five-kilometer, five-meter route that the Japanese soldiers used to go to Melati Island.

Last year’s Visit Musi 2008 proclamation by President Susilo Bambang Yudhoyono was intended to develop tourism in South Sumatra. There are many former Japanese heritage buildings in the area with the potential to attract tourists, especially from Japan.

Developing these attractions won’t be easy. But with determination and political will by the regional government, preservation of the past won’t be impossible.