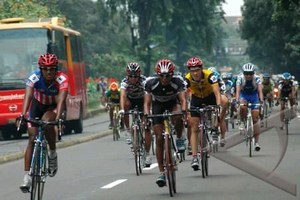 When it comes to the media broadcast of cycle races, I tend to be glued to the television watching the races and, especially the Tour De France. There is just something that I find fascinating about the race as man and cycle battle the elements. I admire these guys and whenever I get on the road with my new mountain bike or on the track, then there is definitely no emulating them!. Another cycle race that I admire is the Tour de East Java. Indonesia is set to hold its fifth Tour de East Java, incorporating a course of 559.6 kilometres from April 2-6 and offering Rp 500 million (US$55,000) in prize money. The course is planned to encompass routes across Jombang, Blitar, Batu, Tosari and Surabaya. Up until now, 22 visiting teams had confirmed their participation, including from Japan, Australia, Iran, Kazakhstan, Malaysia, Taiwan, Netherlands, China, Qatar, Philippines, Hong Kong and Switzerland.