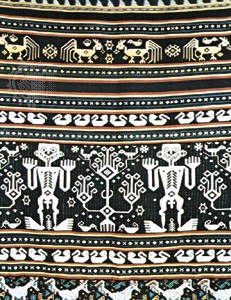 There are two kinds of ikat (woven textiles) in East Sumba — hinggi, which is intended for use by men, and lawu, a songket (embroidered piece) or sarong made of fabric interwoven with gold or silver thread for women. Aside from being used as items of clothing worn daily, these two types of textiles play an important role in the social and cultural lives of people in East Sumba. As a local tradition, hinggi and lawu are exchanged during marriage rituals, used in funerals and kept as a souvenirs. A hinggi is also used to wrap a dead body. According to the beliefs of the local Marapu people, a hinggi stops the spread of odor from a dead body, while the high quality fabric serves as “the deceased’s clothing in the afterlife”.

The East Sumba regency legislative council’s speaker, Palulu Pabundu Ndima, said the longest hinggi ever made measured 12 m long by 1.60 m wide. It was made in 1824 at Mbatakapidu village according to Emanuel Dapa Loka.

He said the lungsin (the yarn traveling the length of a piece of woven textile) was made by 16 people, with eight people on the right and on the left respectively.

The motif was made by a woman called Tonda Mbitu from the Taluara family clan. The entire process of making this ikat, he said, involved weavers from 40 family clans in the Mbatakapidu village.

All the materials needed to make an ikat come from nature. To this end, the weavers must go to the forests and collect the materials — from candlenuts, to the bark and leaves of the lobha tree and roots of the mengkudu (Indian mulberry).

Producing a hinggi measuring 50 meters long requires 16 spools of yarn, 15 kgs of indigo dye and 15 kgs of candlenuts, bark and leaves of the lobha tree and roots of Indian mulberries. The process of making hinggi involves 60 people.

“There are no significant constraints involved in making these textiles. Of course, this is attributable to the blessings from our ancestors and God’s wishes,” said Hendrik Pali, the coordinator of the team tasked with producing the two longest ikat.

“We damage nature when we collect roots, leaves and bark. We need to be at peace once again with nature, as it provides us with the materials we need.

“Our hope by holding this ritual is that mother nature will not be angry and will continue to supply us with these materials,” said Nggau Roti, one of the community’s elders.

As part of the ritual, five chickens and pigs are sacrificed.
The community elders, or wunang, then “read” the desires of their ancestors from the livers of the sacrificed chickens and pigs. These livers, said Nggau Roti, indicated that the ancestors blessed the making of the record-holding ikat.