Alfred Russel Wallace, the so-called father of animal geography, formulated his ideas on evolution by natural selection while observing and collecting wildlife in the islands of Southeast Asia. Wallace was noted for more than providing an explanation for the processes of evolution. His observations in the Malay Archipelago led him to propose an imaginary line running between the region’s islands. These differ as much as do those of Africa and South America and more than those of Europe and North America. 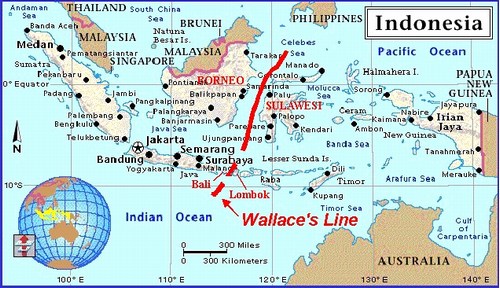 He was particularly impressed by the sudden difference in bird families he encountered when he sailed some twenty miles east of the island of Bali and landed on Lombok. On Bali the birds were clearly related to those of the larger islands of Java and Sumatra and mainland Malaysia. On Lombok the birds were clearly related to those of New Guinea and Australia. He marked the channel between Bali and Lombok as the divide between two great zoogeographic regions, the Oriental and Australian. In his honor this dividing line, which extends northward between Borneo and Sulawesi, is still referred to today as Wallace’s Line.

He believed the western part to be a separated portion of continental Asia while the eastern part is a fragmentary prolongation of a former west Pacific continent. In mammalia and birds, the distinction is marked by genera, families, and even orders confined to one region; insects by a number of genera and little groups of peculiar species, the families of insects having generally a very wide or universal distribution.

Other bio-geographers have since put the boundary between the Oriental and Australian provinces in slightly different locations. As is true of most regions, the core areas of both provinces are clearly distinct, but things are a little fuzzy on the periphery. Thus some bio-geographers recognize the island region between Java and New Guinea as a mixing zone and designate it Wallacea.