The Miracle of the Aloe Vera Plant: Bali 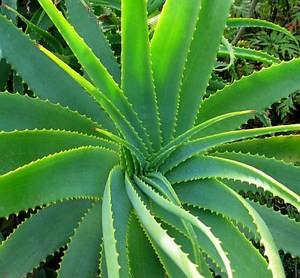 I can walk out into my garden right now and gaze upon extremely large aloe vera plants, and although I was aware to a certain extent of the healing power of the plants, I didn’t realise just how beneficial they were. Candika is always going out there, slicing a piece off, and then rubbing the sap into her hair after washing it. I never questioned her as to why she did this. However, my curiosity got the better of me and I did a quick Google search and was amazed to find tomes of information about this plant. Apparently cosmetic companies add sap or other derivatives from Aloe vera to products such as makeup, tissues, moisturizers, soaps, sunscreens, shampoos and lotions, though the effectiveness of Aloe vera in these products remains unknown. Even more was to surprise me. Aloe vera gel is also alleged to be useful for dry skin conditions such as eczema and sensitive facial skin. Apparently, there is one type of aloe vera that has made those in the medical profession stand up and listen, and farmers in Bali rub their hands with glee.

Here’s an article by Trisha Sertori about this remarkable plant:

Long polysaccharides in the North African aloe vera plant could help reduce illness in HIV/AIDS and cancer patients. At the same time the cactus plant may also help reduce poverty in some of Bali’s dry areas.

Bali is currently producing around 15,000 liters of aloe vera weekly for the European market, according to Floris Schaaper, an engineer with aloe vera producer, PT Alove Bali. That volume, harvested on 80 hectares, is expected to grow to more than 30,000 liters weekly in the coming months.

“By 2012 the plan is to have 500 hectares of aloe vera producing 20 million liters per year. That can be processed at this existing factory,” said Schaaper of the PT Alove Bali factory in Blahbatuh, Gianyar. The modern factory will be formally opened April 5.

Employing more than 200 people across its aloe vera farming and processing system, Alove Bali is having a positive economic impact on the families of Blahbatuh and other areas under aloe vera cultivation.

“We are planting in areas where rice is no longer a viable farm crop due to a dropping water table. The move to aloe vera means farmers can continue to work their lands,” said PT Alove Bali coordinator, Made Karang. He points out aloe vera provides farmers an income three times higher than rice grown on marginal lands.

“PT ALove Bali was started by Hank and Peter Zwanenberg from Holland some years ago. They built a villa here in 1999 and saw the local people did not have jobs. They wanted to find a way to create employment. They saw the employment situation grow even worse after the Bali bomb in 2002,” explains Karang of the beginnings of aloe vera in Bali.

With rice fields in their immediate areas lying fallow due to lack of water, the Zwanenberg’s turned their attention to low water farming. A worldwide shortage of aloe vera and strong European markets suggested the hardy cactus could be the ideal product that would offer sustainable farming into the future for Bali’s dry land farmers.

“That was three years ago. We now have 30 hectares under lease and a further 50 hectares being farmed cooperatively,” said Karang.

The cooperative farming system offers farmers the opportunity to shift from marginal rice growing in areas of low water to aloe vera farming at no cost.

“We give farmers the initial aloe vera plants and they are also paid four million rupiah per hectare every six months to maintain the plants until they are old enough to harvest. From that time on they are paid per kilo,” said Karang.

Schaaper adds that once aloe vera has been planted it reproduces so new plants are always available for farmers. Only the five to nine largest leaves of aloe vera are harvested and the plant continues to produce for 10 to 15 years. Farmers can plant out young aloe vera taken from mature plants so they have a continuous crop.

With increased production, PT Alove Bali hopes to export into the lucrative Asian market, as well as other countries such as the United States. Aloe vera is used worldwide in cosmetics, shampoos, health drinks and medical products. Its use in treating burns is also well documented.

However, Schaaper warns that people claiming miracle cures with aloe vera raise concerns. “I am very skeptical — some people claim they can heal people with serious diseases with aloe vera. But you must be very careful and use the proper research. But aloe vera is a very old treatment. People say Alexander the Great used aloe vera and even invaded a country to get aloe vera as a treatment for his soldiers,”

To aloe vera’s farming families, the cactus is already proving to be a miracle, offering them a growing and sustainable economy.