The Magic of the Kraton: Yogyakarta, Central Java 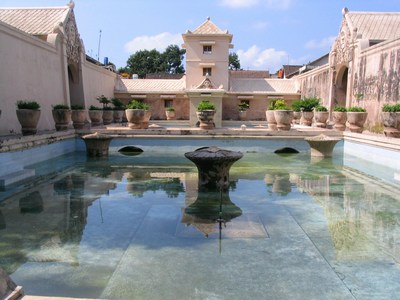 Yogyakarta is well known as a cultural center and plays an important role in both Javanese and Indonesian history and heritage. There are numerous places of interest to be seen in the city and its surroundings. In some ways, one of the saddest and eeriest of Yogyakarta’s sites of interest is the Water Castle, or Taman Sari. Taman Sari translates as “fragrant garden”. Perhaps when this area was first developed as a pleasure park with bathing pools and areas set aside for quiet contemplation it was a complex of fragrant gardens. Today, it seems like a lost world where time and other development has overrun it. Tucked in behind Yogyakarta’s Kraton and seemingly lost amongst a maze of walkways and cramped houses, the Water Castle can come as something of a surprise and even a shock. Approaching it via the nearby bird market, one is immediately struck by the high and extensive ruin of what once must have been the main building of the palace.

In 1812, during the Javanese War and a British attack on Yogyakarta, the area was considerably damaged. Then in 1865, a powerful earthquake added to the damage, which perhaps led to the general neglect of the Water Castle and state of disrepair as Simon Marcus Gower explains.

Quite noteworthy efforts have been made to restore other parts of the former palace to something resembling their former glory. But for the Water Castle, little effort has been made other than to create a stairway for visitors to climb atop of the ruin and look out across the town.

It is from this high vantage point that it is possible to see how the complex has become intertwined and mixed up with the surrounding houses over the decades, and indeed the centuries.

A series of turret-type towers indicate the position of underground walkways. Tall entrance gates hint at the splendor that once must have been.

Beneath the turrets, various complicated and very well (even beautifully) constructed tunnels have led some to speculate that the area was also conceived as a place of retreat; a safe-haven and hideaway during times of war.

We may not know for sure whether those tunnels were once used for such dramatic and serious purposes — walking through them today, sadly, they appear to have become hideaways for school children who huddle together to smoke cigarettes.

Much of the area seems to exist in an air of mystery, intrigue and uncertainty. It is perhaps the fact that much of it is in ruins that we may use our imaginations and try to conjure up what the Sultan and his entourage would have been doing in this complex during its glory days.

It was Sultan Mangkubumi who had the pools, passageways and tunnels built around the middle of the 18th century. It is said the designer for the complex was a Portuguese architect who had been active in Batavia — what is now Jakarta.

The Sultan allegedly had the architect murdered once the work was completed, in an attempt to hide the whereabouts of secret rooms that were created for the Sultan’s pleasure.

Such a story seems fanciful and certainly enhances the air of mystery and intrigue of the place, but there is no doubt there are many rooms and apparent hiding places around the pools. One room that is not hidden, however, is in the tower that overlooks the pools. From here it seems the Sultan would have viewed his wives bathing in the pools below and then given orders for chosen ones to join him.

This tower, along with significant portions of the pool areas and the elaborate entrance gates to the complex, has undergone recent renovation.

Although conservation of the Water Castle is to be applauded, the restoration work has left an odd feeling which perhaps adds to the sense of eeriness of the place.

The tower and the entrance gates have been carefully worked upon but they have been rendered in a pale-cream color that makes them seem pallid, dull and uninteresting. It leaves the area looking white-washed and bleached in the sun.

The tall gateways have considerable carvings and sculpturing within them but all of this is pale-cream too. Large, crowned stone serpents slither down balustrades and should be giving a sense of grandeur and even awe at entering this place but somehow, because of their lack of color, their impact is lessened.

The gateways are large and all around are high walls that suggest the place could have been something of a fortress. It was the Dutch who, in their times here, called it waterkasteel, or Water Castle, and presumably saw it as a powerful, even intimidating place. But today that power and glory seems long gone.

Trying to imagine the Sultan and his entourage at play in the pools of this pleasure park is not so easy today. The pools are empty; in some parts devoid of water save for what appear to be puddles formed from rainfall.

Still, though, one cannot help but wonder and speculate what might once have been. The Water Castle’s ruined state portrays a general sadness and a loss, but the beauty of the labyrinthine underground tunnels and passageways along with the impressive gateways and their sculpturing suggests that what once was here must have really been amazing.

Today it is still quite something, too, but it is an eerie, almost ghostly place of times long gone and souls long departed.