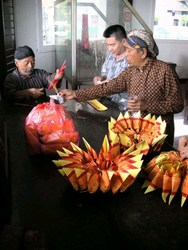 Mount Kawi, a major tourist destination near Malang city in East Java, is renowned for attracting fortune seekers. People visit Mount Kawi to ask for blessings and wish for many different things — a successful business, to meet their life partner or for a good career. It is even common to see ambitious politicians who wish to obtain a high-ranking position hold hajatan (a prayer ritual) at Mount Kawi while offering gifts. Chinese descendants who live in the East Java town of Kediri, for instance, believe a visit to Mount Kawi, which is located in Wonosari village, will bring good fortune to their business. Ong Hok Liong, the late founder of the Bentoel cigarette factory in Malang, was reportedly among the frequent visitors to the location, arriving with his wife Liem Kiem Kwie Nio to meditate at the two sacred graves of Mbah Jugo and Mbah Imam Sujono on Mount Kawi’s slopes.

Mbah Jugo and Mbah Imam Sujono were two of the 75 followers of Prince Diponegoro who fled to Malang after the prince’s arrest according to Indra Harsaputra.

When they were in Malang, which at the time still belonged to Pasuruan Residency, Mbah Jugo and Mbah Imam Sujono together with their colleagues worked to spread Islam.

But there are no clear details to explain why these two graves have become very special; many other graves of important people who worked to spread Islam can be found in East Java.

According to various sources, Ong, for instance, believed he had to carry out rituals at both graves to bring blessings to the cigarette business he pioneered.

One night after he had carried out the ritual at Mount Kawi, Ong dreamed of large bentoel (aroid) roots.

When he woke up, he told the caretaker of the graves; on his suggestion, Ong changed the name of his product to Bentoel. In 1947, the Bentoel cigarette factory became extremely successful.

Munaji, 40, who grew up in the area, said he learned the details of the rituals performed at Mount Kawi from the time he was still a child.

He said on the first Friday of the five-day week on the Javanese calendar, hotel prices and parking fees at Mount Kawi increased to ten times the price on regular days.

The high prices, however, failed to discourage visitors, he said, and the site continues to be as crowded as ever.

“The residents at Mount Kawi depend on the mountain for an income. The people live adequately and can even become rich from selling goods and providing services to visitors,” Munaji said.
He added those who didn’t have money to open a business usually became tour guides.

Rubaidah, 56, a kitchen staff member who cooks for big ceremonies to inaugurate special events, says she feels blessed on the first Friday night of the Javanese calendar and on other big days.

“The prices increase 70 percent on those Fridays compared to a standard week day,” said the woman who has worked on Mount Kawi for ten years.

Mount Kawi is also a melting pot of Chinese and Javanese cultures.

Before selling incense sticks to be used in prayer rituals, Sukirman, 50, changed into Javanese attire, then ran to serve a visitor planning to pray in an open-sided Javanese meeting hall.

“Most of the employees who work here are obliged to use Javanese dress,” said.

Sukirman has been working at Mount Kawi for almost 20 years and said he was happy to serve visitors to the area.

He added that he not only received a salary from the site’s management, but also received many tips from visitors wanting to show their gratitude for the services he provided.

Sukirman also has the job of ensuring that the flames of ten giant candles never go out. The price of one candle can range from Rp 35 million (US$3,760) to Rp 40 million. The candles represent the businesses of those who purchased them — if the flame goes out, it is considered a sign that the business will fail.

If a candle burns for a year and the wick is almost at its end, Sukirman contacts the owner of the candle to change it. Some owners come to replace their candles, while others who can’t make the journey send money to Sukirman and ask him to change the candle for them.

The mixture of Chinese and Javanese cultures can be seen when visitors enter the ritual site on Mount Kawi; the large gate, for example, has a Chinese architecture style but contains Javanese inscriptions.

The mix of cultures can also be seen in the prayer hall; a building designed as a traditional Javanese-style open hall, but full of objects from China, such as lanterns and displays of Chinese calligraphy.

“We do not discriminate people on their race. Both Javanese and Chinese visitors are the same since they come to pray,” Sukirman said.