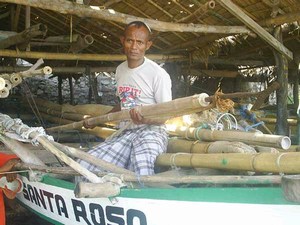 Lamafa, a local term for a whaler in Lamalera village, along with its whaling tradition, was already around hundreds of years ago, before Catholic missionaries entered East Nusa Tenggara in 1500s. To reach the village, visitors fly 30 minutes from Kupang, the capital city of East Nusa Tenggara, to Lewaleba regency on Lembata Island, and continue the trip by ship or car for another four hours. The village is believed to be the only place in the country which has traditional whalers. Carolus Keraf, one of the whalers, said he learned the skill and how to take down a whale with a bamboo spear, from his father, who was also a whaler.

“My father also got the skill from my grandfather,” the 35-year-old Carolus said. Carolus, who has two daughters, still hopes to have a son to inherit his whaling skills.

Lamalera whalers use a bamboo spear, which has a sharp steel tip, to kill the marine mammals. The whaler jumps from his wooden boat and pierces the weak areas of the whale, which are its genitals and fins according to A. Junaidi.

After the first stab, the whaler leaves the spear in the body of the whale and swims back to his boat while his assistants hold a rope tied to the spear.

The whaler then spears the mammal several more times, while his assistants hold the rope until the whale dies. Once the whale is dead, they then pulled it to the shore.

“”The last time I got a whale, it took me only half a day to kill the whale. Sometimes we spend two to three days killing a while if the whale drags our boat far into the sea,”” Carolus said.

There is always one whaler in a boat with five to nine assistants. During the whaling season which usually runs from May to August every year, three to five boats sail together to hunt whales and dolphins.

The whaler who spots a whale first claims “”ownership”” over the mammal and thus has the right to hunt the whale. Other whalers then stay away from the whale and only come closer to help if the boat is capsized.

The dead whale is divided into three — the head is for the landlords of the village, who are considered as the “”owners”” of the sea, the fin is for the whaler, while the body is for the boat owner.

A boat is usually owned together by a small tribe in the village which has a population of about 2,000 people or 800 families in 14 small tribes.

Besides consuming the meat, the villagers also barter the meat for corn, vegetables and cigarettes brought by other villagers living in the island’s mountain region.

There is also a rule in the village that says that a whaler is banned from killing a blue whale since that kind of whale once helped villagers.

“”There was a legend that the blue whale once saved our ancestors from drowning in the sea,”” said Abel Beding, a village tribal leader.

The 61-year-old man said people did not want to eat or trade in the meat when the whaler got a blue whale.

“”So we don’t kill blue whales. However, once we got a blue whale, we then mixed the meat with the meat of other whales. So, they did not know they ate blue whale meat,”” he said.

Before kicking off the annual whaling season, the villagers usually conduct a special ritual to bless their whalers on Lamalera beach.
Since Catholicism has the main religion in the area, the traditional ritual is now mixed with the religious messages.

To mark the beginning of the season, villagers conduct two mass ceremonies led by a priest from a local church.

Hundreds of residents join the masses conducted in front of the small St Peter Chapel built on the beach. St Peter, one of Jesus’ disciples, is their preferred saint because he was a fisherman himself.

The first ritual is a requiem, which is held in the evening, to remember and invite the souls of fellow whalers who died while hunting. The second mass is conducted in the morning with a sermon, gospel reading, host and donation to the church. At the end of the ceremony, the priest sprinkles water to bless the spears, boats and the sea.