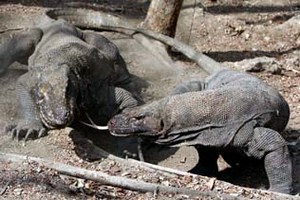 The primitive komodo started to gain popularity after being discovered by Dutch state official, Lt. Van Steyn van Hensbroek, in 1911. In 1912, director of the Zoological Museum and Botanical Gardens Bogor, Peter A. Ouwens, studied the species and gave it the name Varanus komdoensis, which replaced the label komodo lizard. In 1926, Pene W. Douglas Burden from the American Museum of Natural History did more comprehensive research by catching and dissecting 27 komodos. Komodos normally hunt deer, buffalo, boars and horses. However, in the last couple of years, the diminishing number of prey has decreased the number of komodo, which resulted in them killing and consuming one another. Many have also infiltrated people’s backyard and killed their goats. Some people have reported that they were attacked by komodos. Actually, a komodo won’t attack humans as long as people stay away from their hunting spots, which are hard to discern.

The primitive creature is also found in nearby islands, such as in Rinca and Gili Motang (they are located between Sumbawa and Flores). The estimated total komodo population is 3,000. The Komodo island and its surroundings were established as a conservation area called the Komodo National Park in 1980. UNESCO confirmed it as a world heritage site in 1986 according to Ricky Yudhistira.

The centralized management of the park by the government had caused intrigue between the indigenous people and the need for conservation.

The folk story of the komodo goes like this: a local woman once gave birth to twins. One is a human and the other was a komodo. As creatures of the earth within an ecosystem, both had to co-exist. Poverty-stricken people equals to the extinction of komodo.