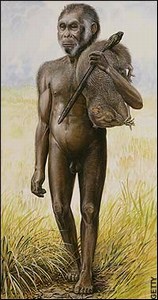 Scientists, wringing their hands over the identity of the famed “hobbit” fossil, have found a new clue in the wrist. Since the discovery of the bones in Indonesia in 2003, researchers have wrangled over whether the find was an ancient human ancestor or simply a modern human suffering from a genetic disorder. Now, a study of the bones in the creature’s left wrist lends weight to the human ancestor theory, according to a report in Friday’s issue of the journal Science.