The Hills and Mountains Around Bandung: West Java 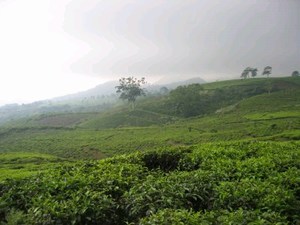 The hills and mountains that surround Bandung are sometimes somewhat humorously and affectionately referred to as the “guardian angels of Bandung“. It is as if they stand guard and protect the city but they might also be thought of as brooding giants. Heading southwest from the city, though, one is more likely to think of the hills as guardian angels. The scenery is attractive and rolling hills lead up to higher mountains, portraying a bucolic charm and peacefulness. Heading towards Mount Patuha, some 35 to 40 kilometers from central Bandung, the urban sprawl of the city gradually gives way to the countryside and the road narrows and starts to climb into the surrounding hills.

All over these hills are strawberries being grown for the local markets but also for the passersby to pick for themselves if they so choose to. Typically being grown in raised cylinders of soil, these strawberries are small but sweet and inexpensive according to Simon Marcus Gower.

Fruitful stop-offs can be made along the way to Mount Patuha and the quite remarkable crater lake that is to be found there known as Kawah Putih. The name Kawah Putih translates as White Crater and it soon becomes clear why this scenic area is so named.

The roadway up to the crater is narrow and quite rough and feels precarious as large boulders seem to threaten a collapse and landslide down onto the roadway. But once this rather worrisome road has been negotiated, one emerges into a clearing where numerous stalls have been set up to serve visitors.

Here refreshments may be bought and the ubiquitous, for this area, strawberries are for sale too. Also on sale are woolen gloves and scarves, which indicate the temperatures in these parts are relatively cooler. The scarves might also come in handy to protect the nose and mouth — for what lies ahead is quite smelly.

Climbing up to the crater’s edge and then on down into the crater, the practically nauseating smell of sulfur wafts up with the breeze. The sense of smell is, then, practically under attack but the sense of sight is soon rewarded with stunning and quite mesmerizing colors.

A pathway leads down to the crater’s floor and from this pathway one can look down and across the quite brilliant colors of this natural phenomenon. The lake that sits in the center of the crater is a quite vibrant white/turquoise color. At the edges of the lake’s waters, the sulfur deposits have stained the land yellow.

The walls of the crater, that in parts soar perpendicularly to a great height, are made up of rock and stones that look as though they have been bleached white. Running along the lip of the crater are trees that add greenery to the view and all of this, combined with a blue sky, creates a colorful and picturesque scene.

There are some trees and shrubs that have grown up — or rather, have attempted to grow up — in the crater itself. But many of these plants are blackened and choked to death by the quite suffocating vapors that constantly surface from the depths of the crater.

The waters of the lake bubble and boil up showing the brooding nature of this crater. In isolated corners, blackened lava-like substances froth and foam up and it is perhaps one of the wonders of this site that the visitor can get so close to these ominous sights of the earth’s volatility.

As noted vegetation in the crater is largely killed off by the sulfur vapors, human visitors should be careful too. If the wind blows in the wrong direction, quite overpowering wafts of the vapors can be sent swirling and thus the protection of a recently bought scarf or handkerchief may be called upon.

Near to the pathway that leads down to the crater floor is a cave-like opening into the wall of the crater. It is here that shafts were apparently mined to collect sulfur — but the danger that seems to lurk thereabouts tends to ward off too much exploration in that direction.

Kawah Putih is, then, quite stunning to the eye but is a little disturbing to the nose. For good views and a breath of fresh air, a short journey on and around the slopes of Mount Patuha can be taken to Lake Patengan.

Through an area known as Walini, rolling and tumbling small hills are passed. These hills are made very attractive to the eye by the tea plantations that cover them, creating the impression of a green carpet only occasionally broken up by huge rocks and boulders strewn about or busy tea pickers.

On then the traveler goes through these hilly plantations that produce the leaf for our daily beverage, and down a short road between all this greenery to the lake of Patengan. It can be a little confusing, though, to know what to call this lake; it is sometimes referred to as Situ Patengan but at other times is called Patenggang.

There is no confusion, however, over what is to be seen and experienced here. A wide and open lake spreads before the visitor, with pine trees dotting the lakeshore making for a perfect picnic place.

Colorful boats sit upon the shore ready to take visitors on pleasure cruises on and around the lake. Near the main public entrance to the lake, stalls are huddled where once again refreshments and strawberries can be purchased as well as locally produced tea.

Apparently, the shape of the lake is that of a heart. There are mythical stories told of how the lake was formed after a lady asked her gentleman friend to prove his love for her by making the lake that we see today. The story is romantic but fanciful and it is far more likely that the lake was formed eons ago by volcanic activity.

No matter how the lake came into existence, what we see today is a scene of considerable beauty that offers an attractive and calming location to relax and enjoy clear mountain air and cool breezes off the lake’s waters.

Both Kawah Putih and Lake Patengan exemplify pleasing and attractive hill and mountain locations where one can enjoy relaxing times among Bandung’s “guardian angels“.