The Feast of Woleka: Sumba

Sumba is one of the islands in the East Nusa Tenggara group. Its culture is simple yet intriguing.

Woleka is a feast under the Sumba culture, particularly for those of the Waijewa ethnic group, and for this thanksgiving, farm animals like buffaloes and hogs are slaughtered — sometimes dozens of them as E. Dapa Loka explains.

The blazing sun lit up the ground as the Merpati Fokker-27 I was on circled around Tambolaka airport in West Sumba, East Nusa Tenggara (NTT), at 2:30 p.m. Central Indonesia Time (WITA).

A vast savanna was noticeable from the sky, seeming almost limitless. Now and again, “black carpets” could be seen stretching across the expanse below — which turned out to be scorched plains to stimulate the growth of fresh grass for grazing cattle.

As soon as the plane landed and the door was opened, hot, dry air began to overwhelm the coolness of the old airplane’s cabin. The heat made my eyes teary, and a gust of dusty wind swept in a hint of aridity.

Still, it was gratifying to see over 70 people standing behind bougainvillea hedges, warmly welcoming the arrivals. They had gathered to meet their families.

A dark-skinned boy suddenly broke away and scurried toward a man and a young woman with creamy skin, who was carrying a lovely eight-month-old baby.

“How are you Om, Tante? What a beautiful baby…,” said the fifth-grader as he looked at the infant in its mother’s cloth sling.

“The plane was late. There was a delay because the pilot was sick. Ah … such a bother,” responded the young father.

Filled with affection, they chatted in a jovial mood that afternoon.

“Peina ole, morru takka yo’u (How are you? You’re so chubby),” said Daud to the young boy in Waijewa, the language of an ethnic group in West Sumba regency.

Frequently, misunderstandings arise when one who does not speak Indonesian meets with members of another ethnic community.

It was scorching at the airport, but as soon as the bemo — a public transport car in Sumba, unlike the one found in Jakarta — we were riding headed for West Waijewa to reach Waimangura, some 15 kilometers from the airport, the air got cooler.

It got so cold late in the afternoon that many people did not dare to bathe after 5 p.m.

After a while, the house toward which we were bound came into view.

Unexpectedly, the sound of a gong welcoming the couple and their child was heard when we were still 200 meters from the house. It’s a hearty greeting.

A 70-year-old woman suddenly emerged at the door with a coconut shell bowl containing water and two lengths of Sumba textiles on her shoulders.

The grandmother thereafter sprinkled her son, daughter-in-law and grandchild with blessed water while wrapping the shawls around the young mother and her baby.

The woman, who has 19 grandchildren, said to her daughter-in-law: “Welcome, this is our home. Now you’ve indeed become a Sumba lady.” The daughter-in-law is originally from Medan, or North Sumatra’s Samosir Island to be exact. Then in a spirit of celebration, a hog was slaughtered for a family feast.

In Sumba culture, water has a very profound meaning. Apart from its physical importance in terms of agriculture or for consumption, water also represents blessing or life.

The young family had arrived for the ceremony to express their gratitude for the blessings God had bestowed on the extended family of the late Aloysius Bulu Malo.

When his children were leaving for university, Guru Alo, as the father of 10 was called, had been persistent in praying to God for their success.

For the Sumba people, such a vow is not made lightly. According to their beliefs, unless it is properly fulfilled, the family will be cursed with misfortunes like illnesses, crop failures or accidents. Therefore, the Sumba people attribute any unfortunate experience to an unfulfilled pledge or commitment.

Woleka is a feast under the Sumba culture, particularly for those of the Waijewa ethnic group, and for this thanksgiving, farm animals like buffaloes and hogs are slaughtered — sometimes dozens of them.

But for the thanksgiving day of Guru Alo’s family, only two buffaloes and two hogs were sacrificed. Earlier, a lot more pigs and chickens had been butchered for the same purpose.

The meat of animals sacrificed on a woleka feast day is distributed to guests. Some get shanks of buffalo or swine, but in general, guests get to take home one to two kilos of meat. The more animals that are slaughtered, the larger their portions will be. Important guests may even receive whole buffaloes with the offal removed.

As a rule, those who get to enjoy jumbo portions have a special relationship with the host; they may be in-laws or people with outstanding status in the community.

But it must never be forgotten that the meat taken home must be repaid in kind. When any of the recipients host a party themselves, they will have to return a portion of meat of the same size to their former hosts. Otherwise a row might ensue.

This principle of reciprocity applies to both thanksgiving and funeral feasts.

Death is a indeed a sorrowful occurrence, but a feast is also given to mark it. In the view of the Sumba people, death is saddening because the deceased departs forever. Nevertheless, a party is held to pay last respects and to symbolize the departed spirit’s passage to eternity — it is the return to one’s origins. 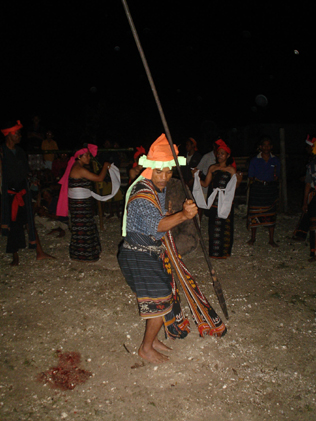 And the spirit is expected to pray for the living or to transfer the blessings of the Creator — who is called Awolo Amarawi (the Creator) or Akanga Wolla Lima Akanga Wolla Wa’i (the Maker of fingers and toes) in Sumba — to the family left behind.

The funeral feast depends highly on the bereaved family or the will of the deceased. The sound of a gong signals the slaughtering of buffaloes and hogs in honor of the dead. The rhythm struck on a gong for funerals is different from that for other ceremonies. Its lulling tempo produces a heart-rending atmosphere.

Guru Alo’s family had a valid reason for fulfilling their father’s vow, because he had managed to send all of his 10 children to university, even amid financial constraints — Guru Alo was just a primary school teacher with a very small salary.

To meet daily needs and educational expenses, he had also maintained a farm and cultivated several rice fields. Guru Alo was barely able to support his family yet they lived happily.

He also faced a tough struggle for his family’s survival when, in 1977, Sumba was plagued by famine and Guru Alo had to find some means of overcoming the scarcity of food. The only way to survive was to look for edible tubers in a nearby forest.

Eventually, he found a wild sweet potato species locally known as engala, which penetrates deep into the soil. The story goes that, although he had dug to a considerable depth, the end of the potato was still buried. It was too valuable to break.

“If I break it, what I’ll have left won’t satisfy my kids’ hunger,” he murmured.

So he used a fiber string to tie his feet and strap it to a branch so that his body hung down as he dug further, his head and shoulders deep in the ground.

“Had the string broken or was cut, dad would have been buried upside-down,” recalled Maria Ege, his eldest daughter.

Feeling relieved with a pile of engala he had dug up, Guru Alo said, “Thank you, my Lord”.

While he was gathering the edible roots, lightning struck with rumbling thunder, followed by a drizzle.

Unexpectedly, a rock on a slope only a few meters away from where he sat was hit by lightning and shattered to pieces. Guru Alo got up immediately and went home with the food.

The writer freelances for Hidup weekly magazine, and is originally from West Sumba.