The Cultural Significance of Betel Leaf 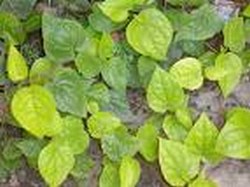 At first too shy to approach the prince directly, Princess Kadambari Was persuaded to honor her guest. She stretched out her hand. She placed the betel leaf in his. She offered the leaf as though she offered her heart. Banabhatta (A.D. 7) Kadambari

Last week I told you a tale about daluman, that “ominous green leafy drink that is revered by the Balinese”. But as the world, including Ubud, falls into a heap of ill health (have you noticed how many people are getting sick these days?), maybe it’s time to start getting into some serious tonics to ward off those “evil spirits” that wreak havoc with our lovely bodies. Or are the evil spirits simply ourselves? Enter daun sirih, or what is otherwise known as betel leaf. Heart-shaped and as glossy as a polished green apple, the betel leaf is surrounded by myths and magic. Its use can be traced as far back as 2,000 years and it is even described in the most ancient books of Sri Lanka. A native of India and south-east Asia, it traveled the high seas in those old sea-faring days, venturing as far as Madagascar and East Africa. And what an impact it made.

Betel leaves are one of the key players in Balinese offerings. You must have seen them because they are everywhere. At the Ubud market, on any day, they can be found on sale in piles and any grandma making offerings will have them neatly stacked beside her, as she wields her knife to create the day’s leafy talismans.

But betel leaves are not exclusive to holy deeds. They are a major ingredient in Indonesian health tonics and play an important role in most Asian cultures, from India to the Philippines.

“The betel begins the conversation”, is a saying in Vietnam that refers to how the practice of chewing betel in formal occasions can “break the ice”. In traditional Vietnamese weddings, the groom offers the bride’s parents betel leaves and areca nuts (among other things that hopefully include wads of cash) in exchange for the bride. The betel and areca are such important symbols of love and marriage, that in Vietnamese the phrase “matters of betel and areca” is synonymous with marriage.

Offering betel leaves with areca nut to guests in India is a common courtesy. In fact, it is safe to say that all traditional ceremonies governing the lives of Hindus use betel and areca. In India, when paying a priest, the money is placed next to betel leaves and set by his side.

“Areca nut?”: I hear you ask. Any discussion about betel leaf needs to include those cosmic seasonings that make up the renowned betel trio: the areca nut (often inaccurately called betel nut) and hydrated or mineral-slaked lime (calcium hydroxide), otherwise known as pamor in Bali.

Pamor is that chalky white powder that is used in offerings and cooking. It gives jackfruit curry a pinkish glow and turns palm sugar irresistibly sweet. It happens to also be loaded with calcium, as you can imagine.

These three ingredients served together are known as the “betel chew” or “betel quid” and also represent the Balinese trinity of Brahma, Siwa and Wisnu. Tobacco follows the line-up but nowadays people in Bali often add a pack of cigarettes as a modern option. In Bali, priests and special guests are presented with a plate of betel chew when they arrive at ceremonies. Just think how old that tradition is!

A few years ago in Singapore, I saw the most glorious exhibition about the ceremony of the betel chew. In the early days, the sharing of betel was almost like a tea ceremony with elaborate carved vessels made to hold each precious ingredient. Don’t you just love the majesty of Asia?

The downside is that betel chew tends to produce a brilliant red color on the lips, a look that was once prized by Indians and who knows, maybe it was a forerunner to lipstick. But on my first visit to Bali in 1974, when everyone seemed to chew betel leaves, I thought they all had tuberculosis!

The never-ending list of health properties of betel leaves is about as long and intriguing as the River Ganges. In Ayurvedic medicine — that holistic system of healing that originated in India some 3,000 to 5,000 years ago — the leaves are said to be an aphrodisiac (of course they are) and a breath freshener, which clearly helps in the amorous department.

The claims for the aphrodisiac qualities of the betel may be due to the alkaloid arakene, present in the leaf, which has properties allied to cocaine.

Beyond the bedroom, betel leaf has been used since ancient times as an aromatic stimulant and anti-flatulent (we really are getting up close and personal now!). It has been used to relieve headaches, sore throats, constipation, toothaches, arthritis and joint pain.

In India, the betel leaf is used as a suppository to cast out worms. In Indonesia it is said to rid a warm body of Candida, blemishes and mouth ulcers and is praised for its digestive powers.
But wait. There’s more. The betel leaf is credited with diuretic properties and is claimed to be an ever-so-powerful antibiotic. It kick-starts the nervous system and aids respiratory disorders. Applied topically, it heals boils and wounds and will even have a mother’s milk overflowing like Balinese holy water.

Indian author Naveen Patnaik in his book The Garden of Life — one of my favorite books on the planet — states: ” … the pleasure which the betel leaf gives is so great that Indian mythology says even gods and goddesses long for it.”

Did I ever tell you about my tooth-filing ceremony a few years ago? I still remember the short shot of tonic they served after filing my front teeth. It was the perfect blend of turmeric, lime, honey and the juice of betel leaves. The tonic was served as an antibacterial mouth wash on completion of the filing. I held the precious liquid to my nose and smelled the earthy bouquet like a sommelier and then sipped it slowly. Perfect, I thought, made even more exciting by the fact that I was dressed like a princess. The glam factor always helps.

But let’s get back to the tonics, otherwise known as jamu in Indonesia. The key to a good tonic is, of course, the freshness and balance of the ingredients and I would have to say, I am shamelessly excitable about food and flavors. Here is a simple jamu recipe that includes the juice of betel leaves, and if you are living in Indonesia you have no excuse for not making it. Selamat minum!