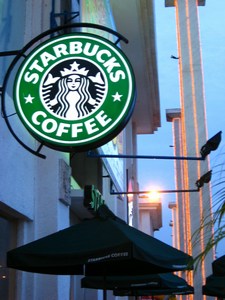 Candika and I were doing some shopping in Kuta Square and decided after to relax and enjoy a coffee. Normally I would go to Dulang but I noticed next door was a new place called The Coffee Bean & Tea Leaf. Always being one to try anything new, we sat and enjoyed the narrow but pleasant décor. I had a look at their extensive menu of drinks and food, and, whilst reading their brochure noticed it was an American concern and a worldwide one at that. Apparently the company (The Coffee Bean & Tea Leaf) have been around for more than 40 years, and they do have the most extraordinary collection of coffees and teas. The company has franchisees located in 15 international countries around the world!. So it seems that Starbucks might have a bit of competition.

The Coffee Bean has a good selection of brewed coffees, and espresso drinks available as well as brewed tea drinks and tea lattes. They are open for breakfast, and during the day the other foods available include gourmet sandwiches, pasta and salads. After perusing the menu, Candika ordered an Iced Coffee and at Rp16,000 wasn’t too bad and she enjoyed it. I had an Iced Chocolate but that was more expensive at Rp33,000. Although we both enjoyed what we drank, we never returned. I suppose it has something to do with preference – kopi from the Kaki Lima or warung tastes so much better. 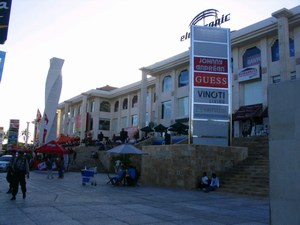 A few days later we were at the Discovery Mall and noticed they had opened a shop there. Now, why wasn’t I surprised!. So, Coffee Bean has now joined the other American corporates resident there – Starbucks, AW, Pizza Hut, Krispy Kreme and Kentucky Fried Chicken, to mention a few.