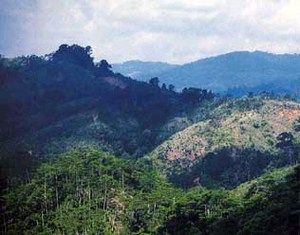 The remote Kanekes village in Banten, East Java, is filled with steep hills where sugar palm trees, bamboo and wild grass surround a small mountain trail. This is the path leading to the village of the Badui people, an indigenous tribe that lives a strictly traditional life. The area is surrounded by rough mountainous terrain that requires considerable physical effort to trek through. Despite the occasional extreme conditions, the Badui village is still an attractive tourist site as an article in the Jakarta Post explains.

“It can be rough if you’re not used to hiking though,” said Omin, a local guide to the Badui.

Omin makes his living mainly by taking tourists to the kampongs in Badui village while running a motorcycle taxi business in his spare time.

The Badui area covers more than 5,100 hectares of land and is separated into two parts, outer Badui and inner Badui with the closest inner Badui village of Cibeo 12 kilometers away from Ciboleger village. Both accept visitors cordially, but the outer area has more contact with outsiders and is thus more open to travelers.

The path to the Badui village starts in Ciboleger, a gateway to the Badui because of its proximity to Kadu Ketug, an outer Badui kampong. Ciboleger is a couple of hours’ drive away from the Rangkas Bitung turnpike exit.

On the way from Ciboleger to Kadu Ketug, stores selling souvenirs like songket (woven cloth), traditional bags made of tree bark, and grocery shops surround a steep but smooth path that leads to a big stone monument marked with a map of the Badui area. A nearby sign lists dos and don’ts for travelers and welcomes those entering Kadu Ketug, a relatively modern outer Badui kampong with 35 houses and shops that sell daily goods like coffee and cigarettes.

Some of their rules prohibit modern inventions like guitars, video cameras and sound recorders. One rule prohibits the use of soap and toothpaste in rivers.

All traces of modernity disappear past the big stone monument and all the brick houses and neon lights turn into small rattan walled huts and oil-filled lanterns.

Not too far from the monument is the house of Badui village chief Jaro Dainah. He is the liaison between the outside world and the Badui people. All travelers who want to enter the Badui villages must pay homage to him.

“All travelers must also pay homage to each kampong chief,” said Jaro Dainah.

Seventeen people have signed his guestbook this month and many
of them have spent a night or two in his hut.

“We get a lot of visitors during the middle of the year, after or before that we just get occasional hikers and students,” he said.

His hut, like many other Badui huts, is a rumah panggung, a house built on wooden stilts placed on rocks or dug into the ground. Layers of thick bamboo shoots make up the floor that, according to Badui customs, must remain above the ground, while tiers of sugar palm leaves tied to the top of the wooden stilts act as the roof.

Further behind his house is a mountain trail leading into more Badui kampongs that can take a whole day to traverse. The Badui people live on a mountain in small homes surrounded by forests and small rice fields and they live independently from the outside world, although they occasionally venture out to other cities like Bandung and Jakarta to sell their handicrafts, brown sugar and honey. Even so, the Badui reject motorized vehicles as well as footwear and always move around barefoot while in the kampong.

Despite the challenging way of life, the Badui exude a tough but calm demeanor as portrayed by Jaro Saidi, chief of the Kadu Keteur kampong, who is also the leader of all kampong chiefs. The farmer — who claims to be 100 years old — looks like he is still in his 80s and is still going strong, something that he may have acquired from living the Badui lifestyle.