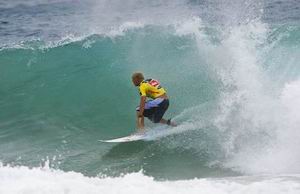 Indonesia is a surfing mecca with good surf breaks on just about all the major islands. In Sumatra there are there excellent breaks on Nias Island and in the Mentawai Islands.

The December 2004 tsunami devastated the coastline, wiping out villages and killing thousands in its wake. Yet two years on, surfer Rizal Dharlis stares with a smile at the waves crashing off Lhok Nga as he digs his toes into the white sand beach. He watches as young Acehnese surfers vie to catch a ride as Andy Nelson writes.

Dharlis sees a future for local surfing and has started an Acehnese surf team. He has organized three competitions for the locals and wants to hold an open national. “It used to be that the locals would maybe come on the weekend. But now, they are here every day. We have some good surfers,” he says.

Ronny splashes out of the water and hauls his board to his nearby motorbike. He has been surfing for three years. “My house is near the beach and I saw the foreigners surfing and wanted to try it,” he says. Now he comes almost daily.

“My perfect day is being out on the water… it’s fun and I’m getting better,” he says. “I look at the waves here, and there is something different. It is still natural, with clean water, blue sea, and clean beaches … maybe the tsunami made it more clean.”