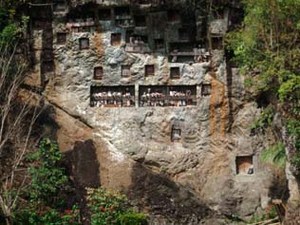 Let’s get this out of the way first: Tana Toraja is not a suitable holiday destination for any of the following: committed vegetarians, animal rights activists, or anyone with a pressing sense of their own mortality. But if you like your meat, don’t get squeamish at the sight of trussed-up pigs on their way to slaughter, and have no problems with a few skeletons, then the green hills of South Sulawesi are for you. The elegant tongkonan houses that sit like boats on a green sea play a central role in Torajan culture. They can neither be bought nor sold (although apparently they can be dismantled and sold in pieces to those wanting to take home a souvenir.

Newly carved and painted house panels can be found for around Rp 50,000 all over the place, but for an authentic piece of Toraja, keep an eye out for sales of old houses, with weathered panels going for around Rp 200,000) and generally last for a century or two.

Their peaked roofs represent the boats the Torajans believe their ancestors sailed up the river when they arrived, but they also bring to mind the buffaloes that are so important to the local economy and culture.

The houses are covered in carvings representing social status and the local belief system, while a family’s importance can also be measured by the number of buffalo horns hanging from the front of the house. The more horns, the more funerals.

The Torajans are obsessed with death, but in a cheerful way. The most important thing in a Torajan’s life is saving enough money and having enough children to ensure their funeral is the best party in town.

Tourists are welcome at Torajan funerals — you’re just another guest, although don’t wear black unless you’re a close member of the family, and avoid the color red. Provided you visit at the right time of year — from June to October — you should have little problem finding a funeral to attend.

Funerals are often held years after death, the body having spent the intervening time lying in state beneath the family home. The family uses the time to save for the big day, which will be a huge affair, involving hundreds of guests who will bring dozens of buffalo and pigs, all destined to be slaughtered and eaten that afternoon.

Most Torajans are Christians, converted by Dutch missionaries early last century. Before that the dominant faith was a form of animism, remnants of which can still be seen in the funerals and graves, and which is still practiced by a small group of people.
White churches dot the countryside, along with house graves, graves cut into boulders and hanging graves complete with effigies of the dead.

Torajans are rarely buried in the ground. Instead, they are placed in hanging graves, where coffins have been suspended high in the air on the side of a cliff, as well as deep tombs cut into the rock and natural cave graves. Displayed along with them are effigies of the dead, known as tau tau.

The cave grave of Tampangallo, accessible along a path through quiet rice paddies, is probably the best and most easily accessible of its type. The tau tau are gathered in low balconies looking down on their slowly rotting coffins and the bleached bones of the dead.

But rather than being spooky, the atmosphere is more that of a going-away party, with the dead about to board their boats to the afterlife.

The cliff graves of Lemo and Londa are surrounded by rice fields of such a bright green that during the day the color is almost blinding. Buffalo wallow in mud pools while small children hunt for tiny fish as their parents check the crops and pick vegetables. At Londa, coffins are suspended from rocky overhangs, while at Lemo, the dead look out over the fields.

But the smallest of the Torajan graves are also the most touching. “Baby Trees” are the resting places of children who died before they started teething. While only those who follow the traditional religion still use them, they are looked after by all Torajans and are regarded as an important part of the old ways.
Once a child dies, the mother must bring it to the tree, in which she will cut a hole and place the child inside. As the tree heals itself it absorbs the body of the child. Many trees have been used for decades, and it is possible to see the small scars that indicate a long-ago grave.

Most of Toraja’s main sights are within a half-hour drive from the town of Rantepao, which has a wide range of hotels, most of which have hot water, something of a necessity this high up, as the nights can be chilly. Few hotels have air conditioning, and it’s not really needed.

We stayed at the Wisma Monton (twin room with bathroom Rp 125,000 a night, including breakfast, Jl. Abdul Gani 14A, ph. 062 423 21675), which has fantastic views looking out over the surrounding mountains and a quiet rooftop restaurant.

As mentioned earlier, Toraja is not the best place for vegetarians. Buffalo satay is a common dish, and most menus feature a wide range of Indonesian foods with a few western standards thrown in. Traditional bamboo-cooked dishes (pork, carp or chicken with steamed vegetables) are also available at most restaurants, although they need to be ordered two and half hours in advance.

Also worth trying are the local carp, which are raised in ponds in the middle of rice paddies. Restoran Mambu and Mart’s Caf‚ (both on Jl. Sam Ratulangi) have almost identical menus and serve cold beer.

While there is public transport in the form of bemo, hiring a driver (Rp 400,000 – Rp 500,000 a day, including petrol and lunch for the driver) is a good idea, as you’ll save a lot of time and many of the roads are in poor condition. Most funerals are held at people’s homes, so public transportation may only take you to the bottom of a very steep, very rocky hill.

A guide (Rp 200,000 a day) is also indispensable, as they will be able to plan a decent itinerary for you, explain the history and often confusing culture, and are your best way to see a funeral.
It is possible to arrange all of this on arrival at Makassar airport, where you will be instantly pounced upon by what seems like every tour operator in the area. Our advice: sit down at one of the cafes at the airport, have a coffee, and then go speak to the people who didn’t bother you.

We ended up dealing with the nice people at Petro Tours, who arranged tickets on the air-conditioned executive bus to Toraja (Rp 70,000 — includes more leg room than some business-class flights and will drop you at your hotel), a driver for two days, entry fees to cultural sites and funerals (most sites charge about Rp 10,000 each).

While there is no charge for attending a funeral, guests should bring a present — usually, it must be said, a carton of cigarettes. Our guide, the fantastic Yoseph Nasaret (0813 423 97528), who cannot be recommended highly enough.

After two days of funerals and graves, graves, graves, he took us on a seven-kilometer walk through rice paddies and villages, pausing for a fantastic lunch at a restaurant overlooking the valley. He has an in-depth knowledge of the area and its history and speaks excellent English.

Visitors to Toraja should also bring presents for the children you’ll meet in the countryside. Sweets are to be avoided but brightly colored markers go down very well with the under-12 population.