Taman Sari Royal Water Park in Yogyakarta is a spectacular place to visit and a must-see on your itinerary when visiting the beautiful city. Located only a ten minute walk south-west of the Sultan’s Palace, it is steeped in history.

Translated, Taman Sari means ‘Beautiful Park’. Built in 1757 by Sultan Hamengku Buwono 1, the style of the building is a mixture of Javanese and Portuguese architecture. At the east gate of the park stands two dragon statues marked 1682 and this being the year according to the Javanese Calendar when Taman Sari was built.

Taman Sari is also called Segaran – a Javanese word meaning ‘man-made’ or ‘artificial sea – and the place where the sultans went boating by passing under the suspension bridge called Kreteg Gantung which connects to the front of the palace. This water tunnel was also a means of escape should the palace be under threat of an enemy attack.

The park sits on 10 hectares of land, and, in the grounds can be found fragrant Kenanga trees. Interestingly, one part of this place is called Pulau Kenanga. Lofty buildings and ponds were specially built and it was from here the Sultan could observe women bathing and choose his ‘lady’ for the night, or so it was said. The ponds were also used by the Sultan and his family as Royal Bathing Pools. 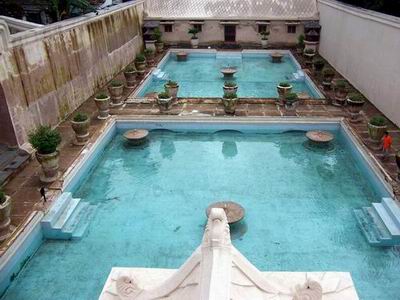 Wandering around this historical place is sheer pleasure and one gets the feeling of what it was actually like when first built. If Batik processing is your thing, then in the entrance grounds you will see some of the only locals allowed to live there displaying their techniques of painting the cloth using cap, a small curved bowl-pen.

You can include the Park as part of your tour of the Sultans Palace, or, do it separately, the latter being the better I would recommend. The best time to visit of course is in the early morning before the midday sun becomes too fierce, and, before the bulk of tourist buses arrive.