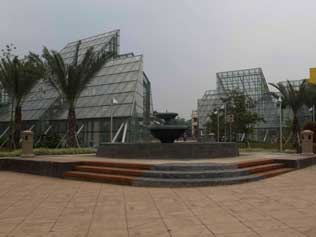 In the past, the only reason I would go to Jl. HOS Cokroaminoto, specifically the stretch where Hotel Formule-1 is located, is the famous nasi gila — an oily fried rice dish that is a mix of vegetables and meat sold by vendors along that stretch.

Other than that, I always tried to avoid it because the traffic was always heavily congested due to disorganized on-street parking according to the Jakarta Post.

Until late April 2007, along with the opening to the public of the new park called Taman Menteng, the traffic in that stretch ran relatively freely.

It was a result of a simultaneous attempt to strictly enforce the parking restrictions, the construction of a new multistory car park and relocation of the street food vendors.

For me, the new park is a neat place to be. Its welcoming plaza made it publicly accessible, especially from the intersection of Jl. HOS Cokroaminoto and Jl. Prof. Moch. Yamin. From that end, you can explore the whole park through a network of walkway strips.

*****
Taman Menteng is considered Jakarta’s prototype model of a multifunction park, a new concept for revenue-generating facilities where traditional parks were considered too costly to maintain.

It is a new model for the provision of more public parks in Jakarta. Inside, you can find its main features — the futsal area, basketball court, a tiny children’s playground and two glasshouses.

At first, I thought the glasshouses were designed for a botanical purpose, as commonly found in parks or gardens.

It surprised me when I saw a bunch of air-conditioning compressors lying next to the structures. The glasshouses turned out to be built to accommodate social events such as exhibitions, weddings, seminars and plant shows.

I could understand the need to provide a transparent structure that could blend in with the landscape. But such transparency was not followed through with thoughtful design.

At least nine air conditioning units were installed inside each of the 100-square-meter glasshouses. The installations appear unplanned, because they were crudely attached to the structural steel pipe inside the glass house.

The interiors are likely to be extremely hot — especially on a sunny day — so they need to have an abundance of them. These transparent structures are unsuitable for the hot climate of Jakarta.

Neither has ventilation in the roof for hot air to escape, an essential feature of glasshouse design.

*****
The glasshouses incorporate a steel pipe structure to form the pitched roof shape. Some of the pipes extend out of the glass facade, without touching the ground. These small decorative details increase the glasshouses’ heat problem.

The extensions produce an effect known as “thermal bridging”, a condition in which an exposed structure becomes a thermal conductor and allows heat to flow through the main structure.
The decorative steel pipes bring more heat into the interior and torment the air-conditioning units.

I never thought that hideous air conditioning units might one day be treated as decorative elements. The designer of this structure should have anticipated the heat problem and produced a more integrated system — or at least covered it with planting.

In my opinion, the glasshouse indicates a fundamental lack of understanding of our own climate. Thermal comfort should be an indispensable principle in good building design.

*****
Overall, Taman Menteng is still a pleasant addition to Jakarta’s urban experience and is a refreshing approach to the provision of more green spaces in Jakarta.

I’m sure there will be more conversions of existing parks on the basis of this prototype model.

Nevertheless, I hope that park officials will pay extra attention to providing good facilities that are better designed.