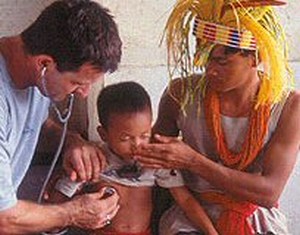 Six years ago, physician and surfer Dr. Dave Jenkins went on a surf charter to the Mentawai Islands with one goal in mind: to find perfect waves. The surf proved to be everything he had hoped for. What he also found, though, were the Mentawai people – mostly women and children – suffering and dying from the ravages of malaria and other preventable diseases. Troubled by the inequity of lifestyles and moved by compassion, Dr. Jenkins went on to establish SurfAid International, a non-profit organization dedicated to the alleviation of human suffering through community-based health programs.

Soon after, Dave was contacted by investment banker, Andrew Griffiths, a fellow Kiwi in London preparing for a surf holiday in the Mentawai Islands. Andrew had heard about Dave’s Mentawai initiative through a friend and set up a meeting, where the two immediately clicked. A plan was quickly hatched a to raise a couple of thousand dollars through friends and contacts – enough to buy mosquito nets and permethrin (the insecticide for treating the nets) – and pilot a small malaria net distribution program to the villages adjacent to the breaks Andrew would visit.

Andrew’s first SurfAid mission was a success. Hooked, Andrew swapped his life in London for a tiny project in a small Mentawai village. Working as volunteers out of Padang, West Sumatra, Dave and Andrew began laying the building blocks of the SurfAid International Mentawai Health Program. 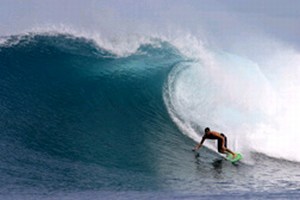 In the years that have elapsed since the founding of SurfAid, others have joined in the effort, including individuals, international corporations, government agencies, and global health organizations. Coupled with the support of volunteers, the international surfing community, and most importantly the Mentawai people themselves, SurfAid has come to exemplify the healing power of cross-cultural partnerships.

SurfAid has expanded to include 53 villages and over 37,000 beneficiaries in our programme, which is a community development health initiative focusing on malaria control and childhood health. SurfAid is also laying the foundations for the communities to run their own health programs and build on the prevention of other diseases.