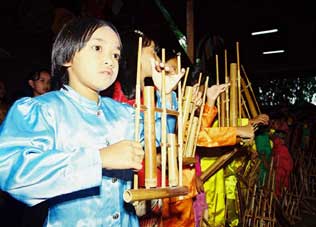 The angklung is a bamboo instrument consisting of a number of vertical tubes attached to a handheld horizontal rod that is rattled by the performer. It has become not just an instrument for making music but also for devising political and social protests.

The name angklung comes from the Balinese words angka (notes) and lung (irregular). Almost every time West Java musicians perform in a foreign country they will play the angklung. That is why the angklung is now known as one of West Java’s icons, aside from wooden puppets.

Tea businessman Rachmat Badrudin regularly entertains his guests with angklung music. Four months ago, he hired angklung players form Saung Udjo in Cicaheum, Bandung, to perform before his guests from Lipton Tea in a valley in Rancabali tea plantation, Ciwidey, around 30 km to the south of downtown Bandung.

The Lipton tea meeting was important for Rahmat as Lipton is the main buyer of the green tea from the Rancabali plantation, which is owned by Chakra Tea. Lipton management came to inaugurate the housing complex for tea plantation workers. Last October, the old complex was burned down and now 46 new houses have been built with the assistance of Lipton.

The angklung players, some of whom were children aged between 7 and 12 years old, had to spend the night in the mess of the Chakra tea company. They left Bandung at 10 p.m. and arrived some two hours later. The location of the event was far from the main road and the angklung players had to trek for an hour along a stony path through the forest and the tea plantation to get there.

“We would like our important guests to remember their trip here. That’s why we are offering them a different form of entertainment,” said Rachmat, who spent Rp 5 million on the performance.

The result was outstanding. Among the guests from Lipton, who came from several countries, was Hans Synhaeve, the managing director of Lipton Ltd. The children distributed among them angklung that produced different notes. Then they asked the guests from Lipton to play their angklung together, guided by a pretty girl wearing a kebaya (traditional blouse) and batik skirt.

This is just one of many examples of how the Sundanese take pride in their traditional music. Almost all secondary schools and universities in Bandung have angklung groups, which are locally known as KPA.

These groups play not only folk songs but also western songs and music from film soundtracks.

On September 25, 2006, hundreds of young men and university students crowded the theater of the Asia Africa Cultural Center on Jl. Braga, Bandung, for the “Angklung in Cinema” concert.

Angklung groups from high schools and universities had been invited by the KPA of the Bandung Institute of Technology to demonstrate their skills at the event.

They played music from the Harry Potter films (Lumos Hedwig), Titanic (My Heart Will Go On) and Grease (Summer Nights).

Angklung player Daeng Soetigna was instrumental in transforming the original pentatonic five-note scale of the angklung into the modern diatonic seven-note scale in 1937. Daeng, who died in 1984, was relieved to be able to pass on the diatonic angklung to one of his students, Udjo Nalagena. Udjo set up angklung workshop Saung Udjo in Pada Suka, East Bandung, in 1958. The workshop introduced the angklung to the rest of the world.

Although Udjo died in May 2001, his children have taken over Saung Udjo and continue to expand the business. Many foreigners and locals learn to play the angklung at the workshop. Saung Udjo is the only place where the angklung is zealously developed. Every day, from Monday through Sunday, angklung performances can be watched from 3.30 to 5.30 p.m. as part of a program called “Bamboo Afternoon Performance”.

Budi Supardiman of the Angklung Music Society (MMA) said that according to various records from old books, the angklung was already known as far back as the 13th century as a musical instrument in West Java. At that time it was used for various religious rites. The art of angklung is known in nearly all parts of Sunda, starting from Banten (among the Baduy tribe), in the Mount Halimun area, in the border area between Sukabumi and Bogor, Malangbong-Garut to Arjasari, Bandung and even Ciamis in the south of West Java

“During the Dutch colonial times, in the 18th century, the Dutch only allowed beggars to play the angklung. The Dutch believed the angklung could unite people and arouse their fighting spirit,” Budi noted.

Angklung music further developed when Daeng, dubbed Si Etjle, introduced it with a modern diatonic seven-note scale. That is why many people call this modern angklung “Daeng’s Angklung”.

According to Budi, only a group of performers who work as one can play angklung music successfully. Therefore it can be used to build character.

“If a angklung player fails to sound his or her note, the whole piece will sound bad, as though something is missing. Playing angklung music also teaches people how to work as a team,” Budi said.

Owing to its cultural significance, playing angklung music was made part of schoolchildren’s regular activities by virtue of a 1968 Education Ministry decree.

Budi said the angklung had also been introduced in many classrooms in other countries. In Singapore, the minister of education organizes an angklung music festival for elementary and junior high school students every year. This festival is usually participated in by 20 to 30 music groups. Hiroshima city in Japan has declared itself an angklung city.

“In Malaysia, the music is extensively promoted and the angklung itself is used in the country’s Truly Asia tourism campaign,” Budi said.

He said universities in Malaysia had conducted research on angklung synthesizers. The country is also trying to obtain a design patent for the angklung, much to the annoyance of Sundanese communities who have urged the Indonesian government to hit back and have been making every effort to demonstrate the angklung is a Sundanese instrument.

On August 22, 2007, for example, the Indonesian Museum of Records (MURI) registered Padjajaran University as the organizer of a concert featuring 10,000 angklung players.

Although other countries may claim the instrument is their own, Indonesia need not worry. Until now almost every country that needs angklung has been importing it from Indonesia. Why? Because angklung can be made only by people who really know the sound and how to make it.

Satria Yanuar Akbar, the marketing manager of Saung Angklung Udjo, said that it could take up to six months to make a set of angklung. The quality, he said, was highly dependent on the water content of the bamboo. In addition, a special device to tune the notes is also needed. In West Java, only Saung Udjo has this special device.

As angklung are in great demand today, Saung Udjo finds it increasingly difficult to meet the influx of orders.

Saung Udjo, Satria said, usually have to refuse 30 percent of orders for angklung because the black bamboo, the material from which angklung are made, has become more and more difficult to find. The dozens of angklung-making families behind “Saung Udjo” can make only 4,000 angklung a week. Most angklung makers in Tasikmalaya and Banjar only make angklung from ordinary bamboo for souvenirs.

“We have our own black bamboo plantation in Jampang, South Sukabumi, but the supply is limited. Before we could get additional supplies from Sumedang and Cianjur but now we can’t,” Satria said.

Aside from meeting the domestic demand, Satria said, Saung Udjo also exports its angklung to Malaysia, Singapore, Japan, the United States, Europe and some other Asian countries.

The great demand for angklung is not on a par with the technology with which it is made. The main problem for angklung instruments is that termites can gnaw on the bamboo so that the sound of the instrument will change. Saung Udjo is yet to be successful in getting rid of termites, although it has done many things to protect the instruments like lining the outer parts.

Another problem is that the different kinds of climates in the importing countries sometimes make the sound of one angklung instrument differ from another.

“If the instrument is sent to a country where the climate is cool, it will produce no sound. If it is too hot, it will produce a shrill sound. We are yet to come up with a solution to this problem,” Satria said.

He hoped that Indonesia’s experts in technology, particularly from universities, would contribute ideas on how to improve the quality of angklung. Korea, for example, now has a special tuning device that refines the sound of the angklung.

“This business is running now and also there is a good economic opportunity because angklung must be tuned every six months and replaced once a year. Now we only need to make angklung more durable,” Satria added.