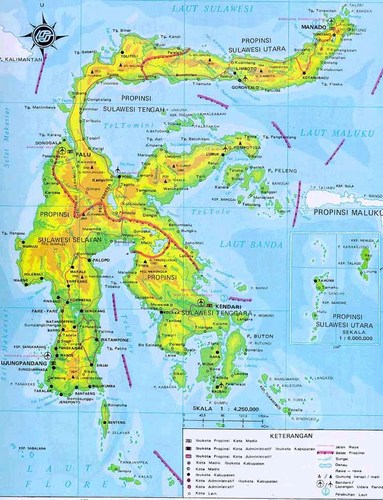 The island formally known as the Celebes, Sulawesi, is not unlike the other larger islands in the archipelago as far as travelling is concerned – you need at least three months to explore it and even then you will only be scratching the surface. However, it is possible to cover the main areas and major attractions in a few weeks. Sulawesi has an area of around 172,000 square km Indonesia‘s third-largest island and the world’s eleventh-largest island.Geographically, Sulawesi has everything to offer the traveller with spectacular mountains ideal for a casual climb and a coastline that is as beautiful as you will find anywhere in the world. Add to that the numerous lakes, dense jungles and friendly people then it is understandable that Sulawesi is one of the few islands where you can experience cultural and marine diversity, the latter offering some of the best dive sites in Indonesia. The largest cities on the island are Makassar, on the South-western coast of the island, and Manado on the northern tip.

There are six provinces in Sulawesi each offering their own cultural contribution. These are West and South Sulawesi Gorontalo, Central Sulawesi and Southeast Sulawesi, and North Sulawesi. The provincial capital of Manado is an international gateways into Indonesia and there are regular flights to all parts of the archipelago. There are of course smaller airports of Gorontalo, Tahuna and Talaud.

Sulawesi is a potpourri of people and cultures with a cultural diversity you will find amazing. In the mountainous centre of Sulawesi you will find the Toraja people, whereas in the peninsular region of South Sulawesi is where Bugis and Makassarese people reside, and, to the north the Manado-Minahasa peoples. The indigenous peoples of Sulawesi are renowned for their diverse art abilities and these include dancing and weaving as well as pottery and other ceramics.