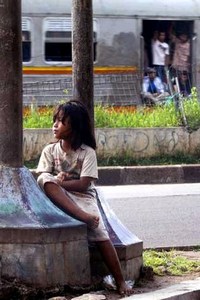 You will see them anywhere you travel in Indonesia and the tourist island of Bali is no different. I was staggered to read the statistics that more than 1,000 street children, including children under five, have been found in Yogyakarta, but the local government is having difficulties dealing with the problem. According to data at the municipal social affairs office, of 1,065 street children, 175 are under the age of five. The majority of the children do not attend school and have no home to return to at night after begging at traffic lights and shopping centers in the city. Some children are sent out to beg by their parents, while others were orphans unable to find places in the city’s few orphanages. Most of the street children enter Yogyakarta from troubled families outside the city and to try and earn enough money to survive.

The central government and the local administration, should work hand-in-hand to address the problem according to Municipal councilor Arief Noor Hartanto. This fiscal year, the city administration allocated Rp 480.2 million to help street children, and every subdistrict will get Rp 5 million to help handle troubled kids.

There are however those street beggars that are classified as ‘professional beggars’. It is hard for the novice traveller to Indonesia to differentiate between those in need and those topping up their bank account. Certainly gives new meaning to ‘alms for the poor’