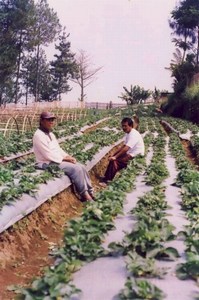 Farmers in Nangkojajar, a hilly area in the Bromo-Tengger national park in East Java, grow an abundance of fresh produce that is sold in markets across Java and in Bali. Some of the best vegetables grown in the area include cabbage, broccoli, carrot, potato, lettuce, aubergine and beet varieties, to mention a few. But despite the fertile soil and fresh mountain air, farmers in Nangkojajar, it seems, have given little attention to growing fruit varieties. That was before Subagyo came along. Subagyo, a 67-year-old researcher from Pasuruan, in East Java, managed to establish his own strawberry farm. Speaking from his strawberry fields in Nangkojajar regency, Subagyo said he decided to start a strawberry farm after hearing complaints from tourists and visitors over the limited varieties of fruit from the area. Subagyo, who has a passion for research into high-yielding fruit hybrids, said he knew this open niche in the fruit market required a fast-yielding crop with sustainable output over a fix period of time.

The strawberry, a low-growing crop that can be harvested on a daily basis over a period of two years, seemed to be the right choice according to Retno K. Djojo.

Subagyo set about collecting information about strawberry cultivation from libraries and consulting agriculturists at the Institute of Science in Surabaya. His farm, comprising 2,500 square meters, now boasts some 10,000 strawberry plants growing in neat rows, which are already producing some 200 kilograms of fruit per week. The fruit is sold at markets in Batu and Malang.

Subagyo is now looking to expand his farm to meet the demand for one ton of strawberries per week for markets in Malang, Surabaya and Bali. He has developed a nursery with young plants and hopes to encourage Nangkojajar farmers to cultivate his cross-breed hybrids from his nursery.

His hybrid strawberries, a combination of a local strawberry variety and imported seeds from Japan, the Netherlands and the U.S., have a fine texture and are compatible to the U.S.-Virginia variety in terms of sweetness.

His success at testing this fruit crop has caught the attention of local apple growers who have suffered severe financial losses following harvest failures.

Subagyo hopes Nangkojajar will become known for its superior quality strawberries, which will help improve the livelihoods of local farmers.

He is also working on developing a local ginseng variety and has studied the research of Dutch biologist Jackwell D’Albuquerque, who succeeded in developing a local variety of ginseng called Talinum paniculata. The local breed was tested in 1915 but efforts at further developing it ceased and the plant became extinct.

Subagyo is taking up the challenge and has discovered a local variety of ginseng in Nangkokajar. Lab tests reveal the local variety contains a high level of nitrogen, a chemical substance essential for good biological growth.

Subagyo hopes the local ginseng will one day be comparable to that from Korea and China. If so, the amount of imported ginseng from these countries could be reduced as Nangkojajar farmers become major suppliers of the medicinal plant.