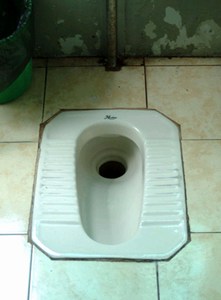 So many times I have been ‘plane-delayed’ at Soekarno-Hatta Airport in Jakarta, and of course I have used the airport as a transit point to other islands in the archipelago. So, it’s only natural that when nature calls, off you go. I have never found a clean western toilet in there or even a mandi. One can walk the entire length of the airport checking out the numerous toilets and the situation will always be the same. There is no gender difference when it comes to using toilets. Women have been known to use the men’s facilities if theirs is fully occupied much to the surprise of those men relieving themselves of a full bladder. And, it applies vice versa. Hopefully all will change now with a consumer report being released showing Soekarno-Hatta International Airport’s toilets received the most complaints of eight airport facilities surveyed.

The survey, conducted by the Indonesian Consumers Organization showed 46 percent of the total 955 complaints on airport facilities were targeted at toilets. The other eight were prayer rooms, sign boards, X-rays, trolleys, waiting rooms, parking lots, airport information and eating places.

Since operator Angkasa Pura II began operating the toilets in 1985, they have never renovated due to the lack of budget allowances. Beginning this year, the toilets will be renovated – about 100 toilets – and also aim to improve the maintenance and cleaning. It is planned that toilets will be built in the carpark.

A local travel agent was quoted as saying “Airport toilets reflect the country. But toilets at Soekarno-Hatta are poorly maintained and dirty. Sometimes there’s no water, tissues or rubbish bins”, and, “Many toilet users still do not know how to use the toilets correctly. We need to educate them.”

Seems like a flash in the pan to me!